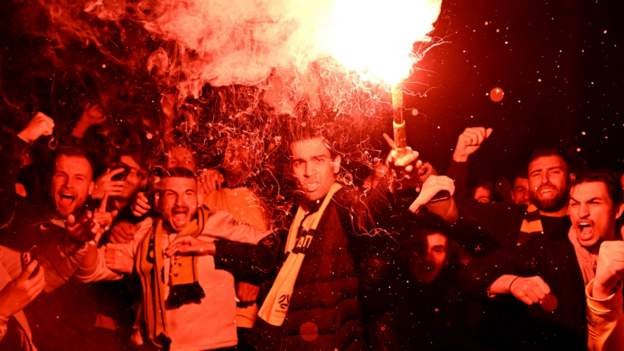 It was 3.18am in Melbourne when Mathew Leckie slotted past Kasper Schmeichel - and those who had stayed up went wild.

Flares lit up the darkness in Fed Square, and suddenly you could forget that football - or soccer - is, at best, the fifth most popular sport in Australia.

Leckie's goal meant Australia stunned Euro 2020 semi-finalists Denmark 1-0 in Qatar to reach the knockout stage of the World Cup for the first time since 2006.

While that Socceroos side was filled with generational Australian talent playing for top European clubs, far less was expected of this squad comprised of domestic A-League regulars, along with players from the Scottish Premiership and English Football League.

The one solid link between 2006 and 2022 is the manager, Graham Arnold. He was assistant to Guus Hiddink 16 years ago, when Australia were only stopped by eventual champions Italy via a 95th-minute penalty.

Arnold told BBC Two after the final whistle: "I'm so proud of the effort. There was a short turnaround but their effort was incredible.

"These boys come in with a great mindset. We've been working on this for the last four years about the belief, the energy and the focus. I could see in their eyes, they were ready tonight."

It is quite the turnaround for Arnold, after an unimpressive qualification campaign in which they scraped through an inter-confederation play-off against Peru on penalties to secure their spot in World Cup Group D alongside world champions France, as well as Denmark and Tunisia.

Australian fans celebrate in Melbourne after Australia's victory over Denmark

Still questions surrounded Arnold, however the idiosyncratic Aussie has never lacked in self-belief and has now guided his country into the last 16 - not that he will be allowing any of his players to enjoy it yet.

"No celebrations!" he said. "That's why we won after a great win against Tunisia. No celebrations, no emotion, sleep, and no social media."

This message had not quite filtered through to Australia match-winner Leckie when he spoke to BBC Two straight after the game.

He said: "I'm proud, exhausted, everything. Hard to describe the emotions right now. We always believed as a group we could do it.

"We had our doubters but with our spirit, our belief, our work ethic and how close we are as a group, it shows on the pitch. That last 15-20 minutes, we battled until the end and it didn't matter what they threw at us. We weren't conceding.

"We'll make the most of it tonight but then it's all about recovery because we've got another coming up."

The doubters will have looked at the make-up of this Australia team, which on paper has none of the star power of 16 years ago.

Germany 2006 saw an Australian team featuring Liverpool's Harry Kewell, captained by Mark Viduka and with Mark Schwarzer in goal, both of who had just played in the Uefa Cup final for Middlesbrough. Tim Cahill, at 26, was in his prime.

The Australian team at Qatar 2022 has no Premier League footballers, and eight from the comparatively less well-regarded A-League compared to three domestic-based players in 2006.

There is more a sense of a new generation coming through for Australia. Arnold has nine players under 25 in his squad, compared to three in 2006.

But on Wednesday in Qatar, it was the experienced names who stood up to be counted. Leckie, 31, scored his 14th international goal - six more than the next highest.

Former Brighton and Arsenal goalkeeper Ryan won his 76th cap against Australia, the most in the squad. The captain made a fine save from Mathias Jensen in the first half, and he calmed nerves late on in the second, scrambling to clear a ball behind with his feet after a 94th-minute defensive mix-up.

The star of the show, however, was Stoke defender Harry Souttar. With him, Australia kept a second consecutive World Cup clean sheet, having had only one in 17 finals matches previously.

He made nine clearances - more than double any other Australian player - and won 13 of 17 duels, seven on the ground and six in the air. No wonder a sign in the crowd demanded he win the next Ballon d'Or.

It all came after Australia, for two-and-a-half minutes, looked to be heading out of the World Cup. That was the period of time between Wahbi Khazri giving Tunisia a shock lead against France, and Leckie finding the back of the Danish net.

Tunisia's win meant Australia needed to do the same, and an as-it-stands table was displayed in the Al Janu Stadium after Khari's goal showing both Australia and Denmark as eliminated.

Whether or not it solely inspired Australia into life can be debated - but Leckie produced the game's only real moment of magic to send his country through.

Another sign in the crowd asked Australian Prime Minister Anthony Albanese to authorise a public holiday if the team won. Either way, it should be expected not many of those in Fed Square at 3.18am made it into work.