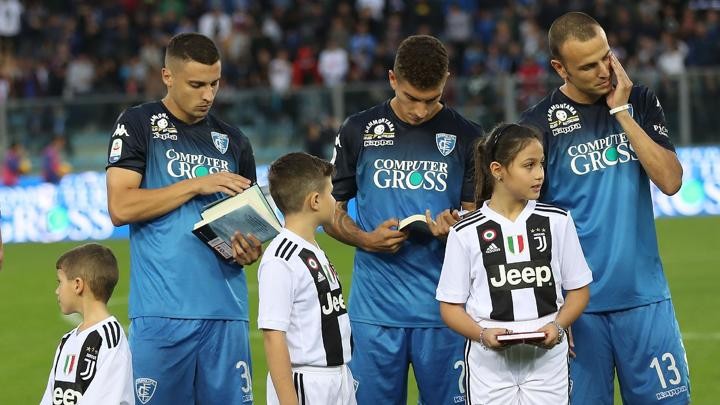 The coronavirus pandemic is set to stop most football competitions around the world for the foreseeable future leaving many fans with time to kill.

Books are an ideal escape at times like this and thankfully there are many great reads on the world game available.

From insightful autobiographies to intelligent dissections of the game, now is the time to get to know the sport you'd usually just watch on a deeper level.

Read on for some of the best football books...

The Miracle of Castel di Sangro

An incredible true story of an American who embraces life in Italy with a newly promoted Serie B side.

Cantona: The Rebel Who Would Be King

For a man of few words, this detailed biography manages to fill the substantial gaps when it comes to trying to understand the puzzle that is Eric Cantona.

A Life Too Short

A sad but important look at the life of German goalkeeper Robert Enke, who tragically took his own life at the age of just 32.

A fictional but nonetheless fantastic biography told from the perspective of Brian Clough as he attempts to take over from bitter rival Don Revie at Leeds United in 1974.

Just like the player himself, this biography is short, sharp and full of great insights into a glittering career.

The Barcelona Legacy: Guardiola, Mourinho and the Fight For Football's Soul

A fascinating plunge into tactics and the stark difference between two of the game's most prominent current managers.

How To Be A Footballer

Peter Crouch pens a funny yet still intimate look back at his career. Full of some cracking anecdotes.

Football's Secret Trade: How the Player Transfer Market was Infiltrated

A must read for any football fan interested in the nitty gritty behind the biggest transfers in the modern game.

Thierry Henry: Lonely at the Top

A detailed look at the career of Thierry Henry written by a splendid storyteller in Philippe Auclair.

The Special One: The Secret World of Jose Mourinho

Arguably the biggest enigma of the modern game, this expose of sorts digs up plenty of albeit questionable dirt on Jose Mourinho.

As the title suggests, Joey Barton's autobiography is focused on the more important matters of his troubled career and gives much-needed insight into one of the game's more controversial figures.

A great fictional tale of an Australian player experiencing the turbulence of football and life in England.

Another fictional series based around manager Scott Manson that combines crime and the round ball to a thrilling effect.

I Am The Secret Footballer: Lifting the Lid on the Beautiful Game

A former Premier League player dishes the dirt on what life is really like in England's top-flight.

The ultimate football fan novel that brilliantly dissects the joy and pain of supporting a club.

The legendary Manchester United manager was always going to have a fascinating story tell and this book is just that.

The Away Game: The Epic Search for Soccer's Next Superstars

Explores the dark underbelly of youth recruitment as it follows the lives of aspiring African footballers looking to turn their dreams into reality.

Fear and Loathing in La Liga: Barcelona vs Real Madrid

A deep dive into El Clasico that explores its origins and why it's one of sports greatest rivalries.

Tor! The Story of German Football

Essential reading for any German football fan as Ulrich Hesse explains the ups and downs of the sport in the country.

Inverting the Pyramid: The History Of Football Tactics

An in-depth look at how strategy, style and formations have all changed drastically over the years.

Living on the Volcano: The Secrets of Surviving as a Football Manager

A brilliant read on the brutal reality of being a manager in the modern game and how many cope with the constant stress of being in charge of a club.