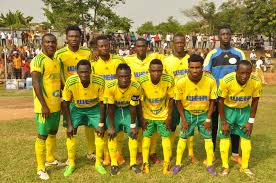 Former Premier League campaigners Okwawu United FC has been sold to the Parliamentary Candidate for Abetifi Constituency for the New Patriotic Party in the Eastern Region, Bryan Acheampong, GHANAsoccernet.com understands.

Reports in the local media suggest that the surprise takeover was finalized late on Tuesday after talks with the Life Patron Nana Somuah Mireku Nyampong III.

The report further added that the second-tier side was on the verge of going out of business when the Parliamentary Candidate for the Abetifi Constituency rescued them.

The MP has also pledged to put in more resources to move the club to its original position as a powerhouse in Ghana Football.

It is expected that the complete take over will contribute to changing the fortunes of the Asaase Aban lads as they prepare for a showdown in the 2015/16 GN Bank Division One League.