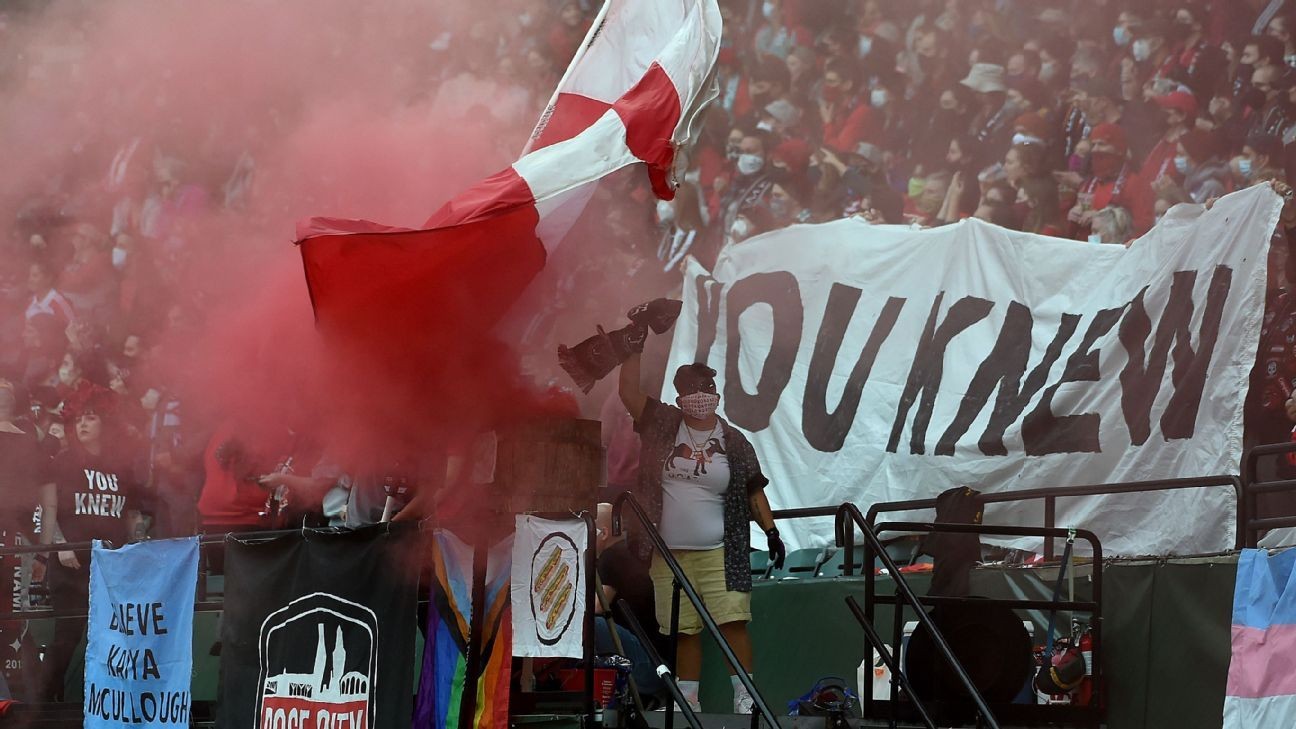 The Portland Thorns have closed their investigation into the club's handling of sexual misconduct allegations against a former coach without interviewing any players, according to a statement issued by Thorns players on Monday night.

However, the players indicated that they might be able to speak at a later date if they choose, which would prompt the investigation to reopened. Several players on the Thorns roster, including U.S. national team stars Crystal Dunn, Becky Sauerbrunn and Lindsey Horan, shared the statement, which was the first formal update on the Thorns' investigation since October.

"We believe the club facilitated the most thorough investigation they legally could at this time," the players' statement said. "At the request of the NWSL and the NWSLPA, both past and current Thorns players were not allowed to be interviewed. When we are allowed to do so, players may choose to be interviewed and we've been ensured that the investigation will be reopened."

The NWSLPA, the union for players in the National Women's Soccer League, issued its own statement shortly afterward Monday night that read in part: "Portland's international review IS NOT affiliated with the joint investigation by the NWSLPA and the NWSL."

A source with knowledge of the situation said the NWSLPA's statement was not issued in conjunction with the Thorns players' statement and was issued in response.

A statement from the NWSLPA: pic.twitter.com/IXquhprzKA

In late September, former Thorns players Mana Shim and Sinead Farrelly publicly shared allegations of sexual abuse and coercion from former coach Paul Riley when he coached the Thorns in 2014 and 2015. Shim had formally filed a complaint in 2015 to the Thorns front office, including CEO Merritt Paulson and general manager Gavin Wilkinson.

Although Riley's contract with Portland was not renewed, he was quickly hired by another NWSL club, which would later become the North Carolina Courage. As soon as the allegations from Shim and Farrelly became public, the Courage fired Riley and later said they had been "assured that he was in good standing."

Paulson issued an open letter to fans on Oct. 4 promising "a comprehensive and deliberate independent investigation" of the club's original handling of Shim's complaint.

"Whatever findings result from this review, I commit to you, we will make public in summary form," Paulson wrote in October.

Can Timbers, Thorns repair bonds with fans after allegations, controversy and distrust?10dCaitlin MurrayNWSL's Paul Riley controversy points to a bigger problem in which league repeatedly fails its players112dCaitlin Murray

The players' statement comes after months of Thorns supporters protesting and demanding updates on the investigation from the front office. Some fans have recently declined to renew their season tickets until the results of the investigation, which prompted the Thorns front office to extend its ticket renewal deadline to Jan. 28 after previously setting it for Jan. 21.

The supporters groups for the Thorns have also demanded since October the full removal of Wilkinson from the club. The players, who issued their own demands in October, haven't gone as far, instead asking for Wilkinson to be "placed on administrative leave until the process concludes."

Despite what Sauerbrunn called "the limitations" of the investigation, including no player interviews, Wilkinson has been reinstated as "president of soccer" for the club, a role that oversees both the Thorns and the men's club, the Portland Timbers. In November, Wilkinson has been replaced as the Thorns general manager by former player Karina LeBlanc.

"Based on the results of the investigation, we recognize the reinstatement of Gavin Wilkinson as President of Soccer," the players' statement said.

The statement on Monday revealed for the first time the name of the law firm that conducted the Thorns investigation, DLA Piper.

The club had previously refused to disclose who it had hired, which became a complaint of fans asking for more transparency. The players' statement calls DLA Piper's investigation "an internal business review of soccer operations."

Now, with Portland's investigation closed without player interviews, the focus will shift to the other ongoing investigations that are expected to involve direct player input. The NWSL and the NWSLPA are conducting a joint investigation "to ensure the safety of the players and "ensure players have access to all relevant info," according to an NWSLPA statement.