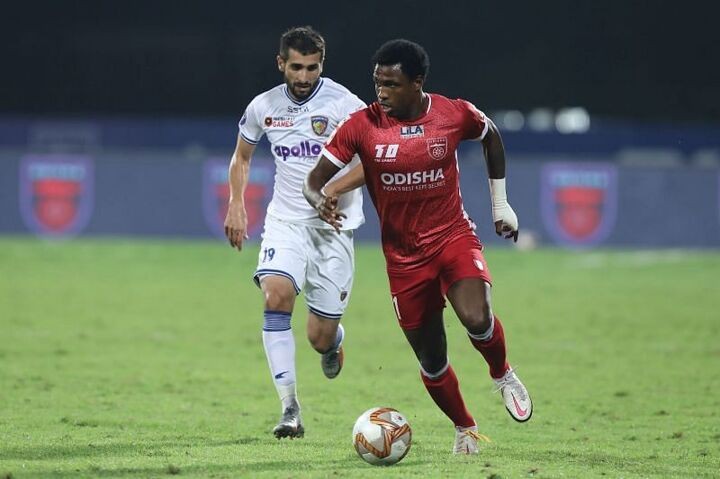 Chennaiyin FC picked up a crucial 2-1 victory against Odisha FC in Match No. 57 of the Indian Super League (ISL) and climbed up to the fifth spot in the table. Chennaiyin FC took a 2-0 lead before a late rally from Odisha meant that they had to cling on for all three points towards the end of the game.

Here is how the players fared in the match.

Despite conceding two goals, Arshdeep was actually one of the better players on the pitch for Odisha FC. If not for him, the margin of loss could have been higher.

Making his debut for Odisha FC today, Kamalpreet did the basics right and played a solid game before being substituted towards the end. He will have a bigger role to play as the season progresses.

Taylor did his fair share of defensive work reasonably well. But the captain would be disappointed by the performances of his teammates, who gave away goals that were completely avoidable.

Bora made an elementary mistake for the first goal while giving away the penalty which handed Chennaiyin FC their second goal. He will learn from this, but it was easily his worst performance of the season.

Antonay's crossing and the final ball left much to be desired. He will need to regroup soon before time runs out.

To progress further, Sarangi needs to learn the art of a clean tackle. His challenges are always well-intentioned but referees inadvertently blow for a foul, which ended up happening on multiple occasions today.

Vinit Rai had the chance of putting a corner that could have led to an equalizer in the last minute. He failed to do it.

Even though Alexander did not end up on the winning side, he was one of the best players on the pitch with his energy and distribution.

Jerry should have had an assist when feeding Manuel Onwu in the first half, but he was let down by some poor finishing.

Onwu did not have a good performance, missing a couple of easy chances. He very much looks like a striker who is low on confidence at the moment.

Marcelo Pereira looks like a shadow of the player he once was in the ISL. Having been substituted in the second half without making any impact, it is very likely he will not start in the coming games.

Sekar provided energy when he came on in the second half, but his efforts weren't enough to help his team with a goal.

Mauricio had an instant impact after coming on to the pitch and scored a lovely goal using the defender in front of him as a shield. If Odisha FC are to have any chance of climbing up the table, he must start more matches.

Daniel had a chance to equalize for his team in the dying moments with a curling effort, which unfortunately found the keeper's hands. He will be a handful for other teams if given more playing time.

Kaith made some excellent saves and this is the reason why Chennaiyin FC could cling on for all three points towards the end.

It was a good performance from Reagan Singh, who showed no signs of tiring as the match progressed.

Chennaiyin FC captain Eli Sabia was a rock at the heart of the defense. He won almost every aerial ball he contested alongside Sipovic.

One of the biggest advantages of having a tall defender like Enes Sipovic is his ability to clear the ball with his head on almost all occasions. That was on full display in the match today.

Jerry is one of the trickiest left-backs in the league. His tireless running and feints kept the Odisha FC midfield and defense guessing the whole night.

Thapa looked close to his best once again today, after a few inconsistent performances on his return from injury. Chennaiyin FC would hope that his form continues in the same way.

Memo Moura silently went about his work of winning the ball back and recycling it whenever possible.

Fatkhuloev got a rare start and was a threat on the wings. His ability to run with the ball will help as the season progresses, if he remains fit.

Chhangte showed much better decision-making than he has in the previous matches. He routinely kept passing where he would have otherwise shot. With this new approach, Chhangte looked a far bigger threat than before.

The hero of the match for Chennaiyin FC, Goncalves scored two goals. The first one was a composed finish while the second one was a well-taken penalty.

Rahim Ali's dribbling skills were on display once again today. But he needs to learn how to release the ball on time. On many occasions, the ball was lost and his team was hit on the counter-attack.