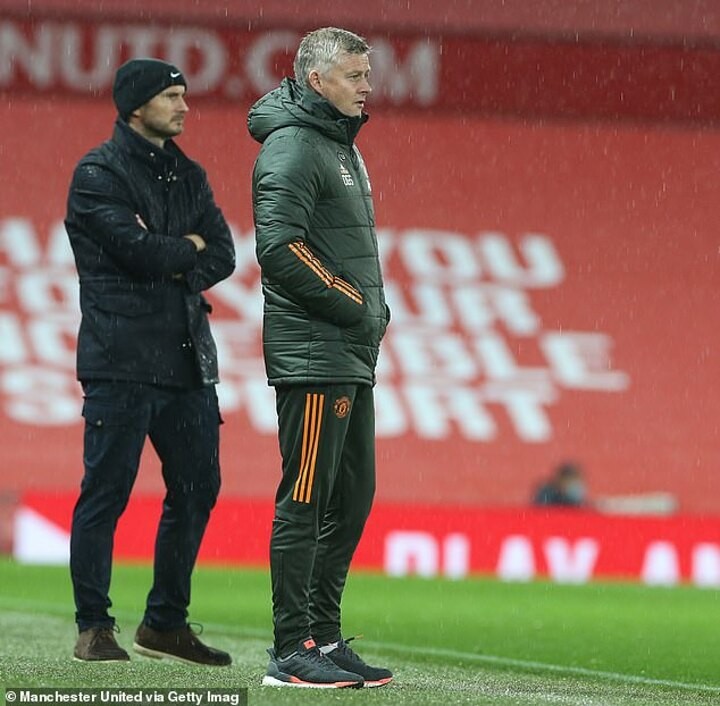 There were nearly 54 minutes on the clock when Ole Gunnar Solskjaer left his dugout and stepped on to the side of the pitch at Old Trafford. He had seen enough. We all had.

Solskjaer peered down the touchline and motioned to Paul Pogba and Edinson Cavani, who were warming up by the corner flag in the teeming rain.

Say what you like about Pogba’s form and the fact Cavani had not played a competitive game for seven months, it still felt like quite a power play; a sprinkle of stardust to liven up this most desperate of games.

Moments later, Manchester United’s No 6 and their new No 7 were stripped and ready to replace Juan Mata and Dan James.

United had a corner at the time. Bruno Fernandes exchanged passes with Luke Shaw and swung a pass to the near post, where Cavani’s first touch in English football was an instinctive flick to turn the ball into the side-netting. It was as close as United went to a goal all evening and the Uruguayan’s only contribution of note.

Pogba’s arrival in his preferred No 10 role pushed Fernandes out to the right and then into a deeper position when the tardy Mason Greenwood came off the bench and in from the cold after two games on the naughty step.

Last season’s top scorer Anthony Martial was again suspended and his replacement at centre-forward, Marcus Rashford, forced the two best saves of the match out of Edouard Mendy. New £40million signing Donny van de Beek did not even get on the pitch.

There is no shortage of attacking talent in this United squad but Solskjaer has to get the best out of the players at his disposal and fast. United are in 15th place in the Premier League, having failed to win any of their opening three league games at Old Trafford for the first time in 38 years.

Two of them have ended in defeat by Tottenham and Crystal Palace and this goalless stalemate was a difficult watch for even the most committed of supporters. Arsenal and Everton are next up.

Pogba’s performance here was one of the few positives and the hope is that he and Cavani can create the kind of partnership that he enjoyed with Zlatan Ibrahimovic in the 2016-17 season.

‘It’s a nice challenge and a decision to make when you’ve got good players on the bench,’ said Solskjaer. ‘All three games this week he [Pogba] has made a positive impact.

‘He’s been out for a while with coronavirus and maybe I was unfair starting him in a few games but he has done great when he’s come on.

‘Edinson has been out for a little while. He’s a good presence in the box and he’s going to give us a lot. He gives us something different to what we have of course. He has come in and had a great influence on the training ground already, but we know he needs game time to get his sharpness.

‘I think we started a little bit slow but if anyone was going to be a winner it was us. We decided to get out of the box to get a foothold in the game, but didn’t create too many chances.’

They didn’t and until Solskjaer can find the right combinations among this group of players it will continue to be something of a stop-start season.