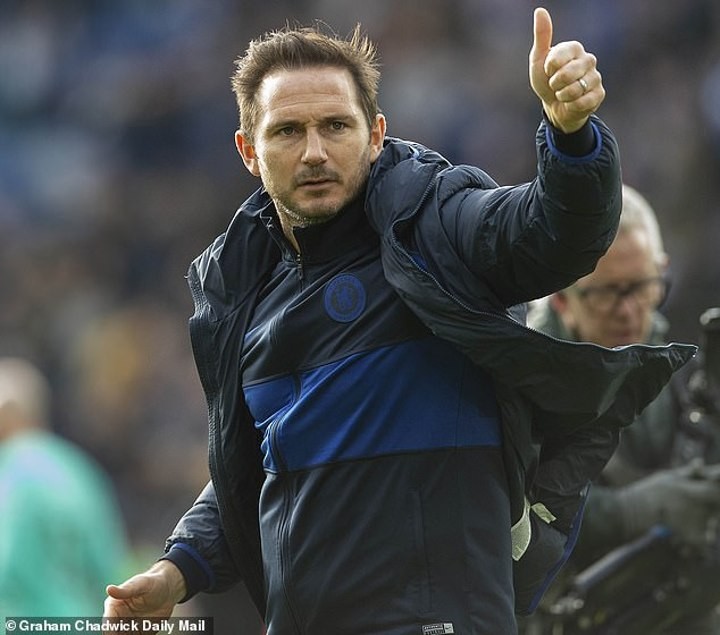 Such are the fine margins in football, determining whether Frank Lampard's first season in charge of Chelsea has been a success is set to hinge entirely upon the crunch month ahead.

Chelsea currently occupy the fourth and final Champions League spot for next season, but their grasp has loosened in recent weeks with Sheffield United and Tottenham both closing the gap.

Lampard's men face key fixtures over the next five weeks which will likely prove to be a defining period of their season with an FA Cup tie against Liverpool and a two-legged Champions League knockout showdown with Bayern Munich.

They will also play host to both Manchester teams, Everton and Tottenham to take on their former boss Jose Mourinho. There is no sugar coating it, it is simply make or break for Lampard and his young Chelsea side.

Up first on this testing run, Chelsea will welcome Ole Gunnar Solskjaer's men to Stamford Bridge for a Monday night clash under the lights.

United don't pose an immediate serious threat to their top-four ambitions although victory could see them move to within three points so it is an opportunity for Chelsea to give themselves some real breathing space.

Lampard's men have been poor at home in recent times and have only won once at Stamford Bridge since December 4 - so he will be keen for his side to put an end to that run.

Their opening-day 4-0 drubbing at United will provide some extra incentive, too. Winning this one will not only give them confidence to tackle this tough period head on, but it could also eliminate United entirely from the Champions League race and give them one less team to worry about. In other words: It's a big game for Chelsea.

Frothing rivalry will be in the air for this one, with a London derby for the ages on the cards.

Bad blood exists between Chelsea and Tottenham generally, but this time a certain Jose Mourinho has been thrown into the mix. It's master vs apprentice as Lampard prepares to lock horns with the man who made him one of the best midfielders in the world.

No love will be lost for Mourinho, who is now managing another of Chelsea's rivals following his United spell.

Should Chelsea fail to take any points from their tie with Ole Gunnar Solskjaer's men, Tottenham could be well on their tail by the time this one comes around. A tense affair is being billed for sure.

Earlier in the season Mourinho ruffled Chelsea feathers by saying he 'worried' for the Blues during his punditry duties for Sky Sports, despite them at that point embarking on a fine run under Lampard. It got under the skin so much so that assistant manager Jody Morris took to Twitter to respond.

Chelsea reminded Morris of his conduct and responsibilities after the action, and the club then happened to experienced a downturn in form.

Victory in this one, for Chelsea, would be huge. If not, they may start to get a little hot under the collar. Particularly so when it comes to Morris.

If there is one game Chelsea fans are looking forward to, it's this one.

Nostalgia tinges the air as Blues fans recall the Champions League final of 2012, during which Lampard and Co toppled Munich in their own backyard with last-gasp drama, to be crowned kings of Europe for the first time.

Things have changed drastically since then. This time, Lampard returns at the helm guiding a youthful squad who enter the tie as clear underdogs. Few people are expecting them to progress.

The Blues will be depending on their big name experienced stars to get something from Bavaria, before the crunch return leg at Stamford Bridge.

Days after touching back down on English soil, Chelsea travel to the south coast to face a Bournemouth side fighting for their Premier League lives. Lampard cannot afford to rest players for either trip, meaning stress levels this week will be at an all time high.

It's a nice problem to have when you're competing on numerous fronts, but Chelsea have an interesting situation when they face Jurgen Klopp's Liverpool in the fifth round proper of the FA Cup.

On one hand, the competition presents an excellent chance of maiden season silveware for Lampard. It would elevate his stock hugely.

Yet on the other hand, the club legend will be wary of squad burn out. Progressing in the FA Cup at the expense of securing a Champions League place would not be met too kindly in the boardroom, even though it would put a smile on supporters' faces.

Lampard and Chelsea also find themselves somewhat in the dark regarding who they will actually play. Liverpool fielded what was essentially an under-23s team in the last round against Shrewsbury, after seeng the tie forced to a replay.

The question is now posed, will Klopp reward those same young players by giving them an outing they'll never forget under the lights at Stamford Bridge?

Carlo Ancelotti's Everton really appear to be clicking into gear now, and are starting to harbour European aspirations of their own.

When the two sides met at Goodison Park in December it's safe to say Everton stole the show. Chelsea looked sluggish at the hosts stormed to a 3-1 win under the then interim manager Duncan Ferguson.

Amends need to be made, though Lampard and Co would perhaps quietly admit they would take a point from this tricky one, gladly.

The Blues travel to the Midlands to face Aston Villa shortly after, on March 14, in another match which sees them visiting the home of a relegation battler. Fresh legs will be needed, no doubt, as Villa battle to retain their top flight standing.

Chelsea may well think they have weathered the storm, only for Pep Guardiola's men to roll up in west London.

That said, with a tough clash against Real Madrid on the cards, City will have played both legs and will either still be flying high in Europe, or back at home with tails between legs.

Guardiola will want to finish as close to the top of the table regardless of what happens, meaning Chelsea will not get an easy ride of this one.

Previous results may well mean Chelsea seriously need to win in order to keep a grasp on top four contention, though City travel very well indeed in the capital.

So far this season Guardiola's men have won every time they have visited London, barring a recent 2-0 mishap against Tottenham.

Of their three other matches in London - versus West Ham, Crystal Palace and Arsenal - City have hit the back of the net 10 times.