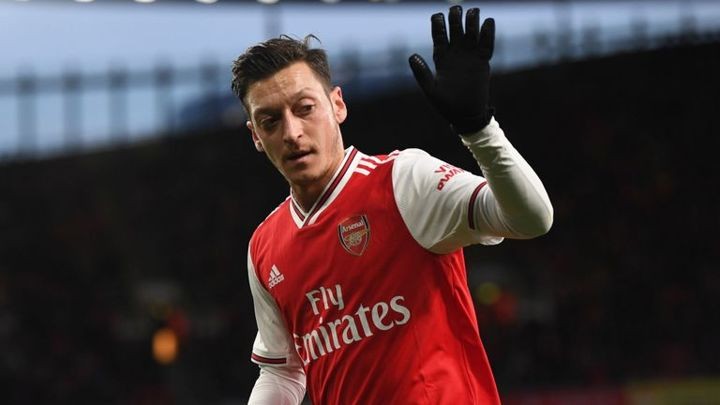 Mikel Arteta spoke about restoring Arsenal's "lost" identity in conversation with Sky Sports ahead of this game. That identity - the fluid passing and thrilling attacking for which they were once known - was described as the "foundation" for all he hopes to achieve at the club.

On a day of many positives, then, he will have taken particular satisfaction from the third goal in what turned out to be a 4-0 thrashing of Newcastle. Between the Lucas Torreira header which started the move and the Mesut Ozil finish which ended it, there were 35 uninterrupted passes - the most for any goal by any Premier League side all season.

Every single player had a touch and it was fitting that the final one came from Ozil. The goal, a close-range finish from Alexandre Lacazette's pass, ended a 10-month barren run and capped an eye-catching performance.

It is only two months ago that the 31-year-old was booed off by his own fans during a dismal 3-0 loss to Manchester City at this stadium. It felt like his nadir. Perhaps even a point of no return. But the standing ovation which greeted his withdrawal on this occasion sums up how the mood has changed under Arteta and how Ozil has turned his own fortunes around.

If Arsenal looked like their old selves again here, then it owed a lot to him. Ozil has endured a turbulent two years on and off the pitch, and while he had earned plaudits for his renewed focus under Arteta, there was still a sense that the real Ozil - the Ozil who previously carved open defences and racked up assists - was yet to reappear.

Arteta called for patience with him before the game - "you don't go from where he was to where he can be in five weeks, I'm sorry," he told Sky Sports - but this was more like it. Arsenal started sluggishly, struggling to control the game or trouble the well-drilled Newcastle defence in the opening stages, but Ozil was the catalyst for what was to come.

He came to life soon after the half-hour mark, scooping the ball over the head of a Newcastle defender near the halfway line and, with the outside of his left boot, releasing Pierre-Emerick Aubameyang with a nonchalant, diagonal pass into the left channel.

It was the first of four chances he created over the course of the game. Two minutes later, he had the home fans purring with a backheeled pass into the path of Hector Bellerin. Soon after that, he teed up Eddie Nketiah for a first-time shot which forced Martin Dubravka into action again.

He picked up where he left off in the second half, picking out Nicolas Pepe - another standout performer on the day - with a smartly-disguised reverse pass on the edge of the Newcastle box. Arsenal should have scored from the resulting chance, but Nketiah could only strike the top of the crossbar from Pepe's cut-back.

Ozil was enjoying more space at this point, with Newcastle no longer able to handle his movement between the lines, and soon enough there was another eye-catching through-ball for Pepe, this time threaded in behind the on-loan Tottenham defender Danny Rose.

Ozil seemed to be at the heart of almost every attack and he was effective out of possession too, chasing down Newcastle defenders willingly and pressing aggressively. Among Arsenal players, only Granit Xhaka covered more ground. It's that level of work-rate which has ensured that, despite struggling to produce in the final third until today, he has been one of only three Arsenal players to start every Premier League game under Arteta.

He was not the only creative force in the Arsenal line-up either. For the first time since November, there was also a start for Dani Ceballos, who partnered Xhaka in midfield. The 23-year-old was said to be considering cutting his loan spell short last month, but on the evidence of this performance he could yet have an important role to play this season.

Indeed, while it was usually left to Ozil to find the killer passes, it was Ceballos who dictated the game, skilfully evading his markers and spreading the ball from one flank to the other as Arsenal probed for openings. When he was replaced by Lucas Torreira in the closing stages, he had found a team-mate with 85 of his 91 passes, including 63 in the Newcastle half.

That total included a string of eye-catching long-range balls, many of them aimed at the over-lapping Hector Bellerin on the right flank, and while there were moments in the first half when Newcastle exploited gaps in Arsenal's midfield, Ceballos did not shirk his defensive responsibilities. Only Pepe won possession more times. Nobody contested more duels.

It was enough to earn him a standing ovation of his own, but it was Ozil's that felt most significant. Arsenal are rediscovering their identity under Arteta and no player is more important to it than Mesut Ozil.