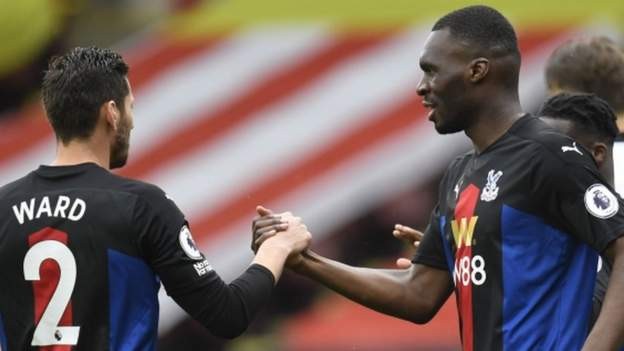 Crystal Palace secured their Premier League status for another season with a comfortable victory at already-relegated Sheffield United.

Christian Benteke scored with a deflected shot after 67 seconds to claim his fourth goal in 10 games for Palace, and had chances to improve that tally.

The Belgian striker, 30, had a point-blank header saved by Aaron Ramsdale before firing against a post in the second half.

Captain John Egan spurned Sheffield United's best chance of an equaliser shortly after the interval, slicing over from a corner from six yards out.

But Ebere Eze broke forward late on to convert a second and secure the Eagles' first win in five games, putting them beyond reach of third-bottom Fulham.

That capped a fine performance by the English midfielder, 22, who breezed past Egan in the opening minute before laying off to Benteke, whose shot deflected off George Baldock and over Ramsdale into the Blades' net.

Jeffrey Schlupp's cross then picked out Benteke, who is out of contract this summer, but he directed a free header too close to Ramsdale.

And the Blades offered little in response as their miserable season lurched closer to two unwanted records - most defeats and fewest goals scored in a Premier League campaign.

Sheffield United are already preparing for life back in the Championship and, after securing a ninth straight season in the top flight, Palace are also set for a rebuild this summer.

Manager Roy Hodgson and half of the matchday squad at Bramall Lane are out of contract at the end of the season, or returning to their parent club.

An announcement is yet to be made on whether Hodgson, 73, will extend his lengthy managerial career or Palace will seek a replacement, but whoever is in charge at Selhurst Park next season, they can rely on the services of two of England's most promising youngsters.

The Eagles have signed Eze and Tyrick Mitchell, 21, to long-term deals and they could be mainstays in the Palace side for years to come.

Deployed in an attacking midfield role, Eze continued an impressive first season since making a £19.5m move from Championship side QPR.

He was a constant threat with his pace and poise on the ball. He laid on the opener and dispossessed Chris Basham before firing narrowly wide in the first half.

In the first half, Eze also found Wilfried Zaha, whose shot was blocked by Egan, and he burst forward again to clinch victory. Eze broke down the left and cut inside, feinting past a couple of defenders before scuffing a shot into the bottom corner.

Mitchell, meanwhile, was comfortable at left-back but for a clumsy tackle on Sander Berge, making his first start since December, which might have been given as a penalty.

Palace now need three wins from their last four matches to reach 50 points for the first time in a Premier League campaign. If Eze and Mitchell continue to develop, the Eagles will hope to be challenging for a top-half finish next term.

Chris Basham (Sheffield United) wins a free kick in the defensive half.

Attempt missed. Oliver Norwood (Sheffield United) right footed shot from outside the box is too high from a direct free kick.

Daniel Jebbison (Sheffield United) wins a free kick in the attacking half.

Attempt missed. Gary Cahill (Crystal Palace) header from the centre of the box misses to the right. Assisted by Luka Milivojevic with a cross following a corner.

Eberechi Eze (Crystal Palace) wins a free kick in the attacking half.