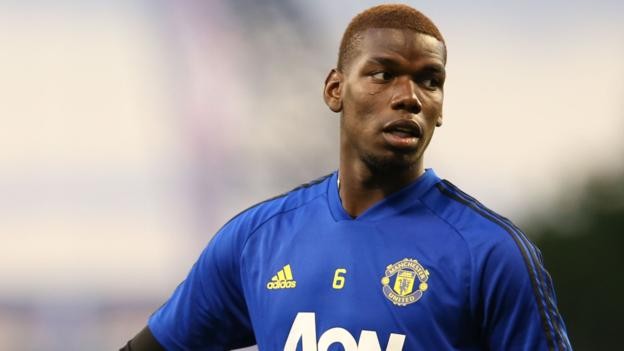 Manchester United boss Ole Gunnar Solskjaer says Paul Pogba has "never been a problem" and there is an "agenda" against the France midfielder.

Pogba's agent Mino Raiola has said the 26-year-old wants to leave United and hopes "there will soon be a satisfying solution for all parties".

Pogba, who is on the club's pre-season tour, said in June that "now could be a good time to move elsewhere".

Solskjaer says the club has not received a bid for any player.

In his first news conference of pre-season in Perth, Australia, Solskjaer referenced a video of £89m record-signing Pogba and team-mate Jesse Lingard that was reported as a bust-up between the pair.

"It's an agenda against Paul, he's a great, great professional, never been any problems, he has a heart of gold," said the Norwegian.

"Jesse and Paul yesterday walking around and it's portrayed as a fight between the two boys and I know you're here to sell players and stories but they're all professional."

Solskjaer added: "Paul's never put himself out of the team, always given his best and I can't report anything but that agents talk all the time.

"I can't be sitting here talking about Paul and what agents are saying, we've got a few years left of his contract and he's been fantastic."