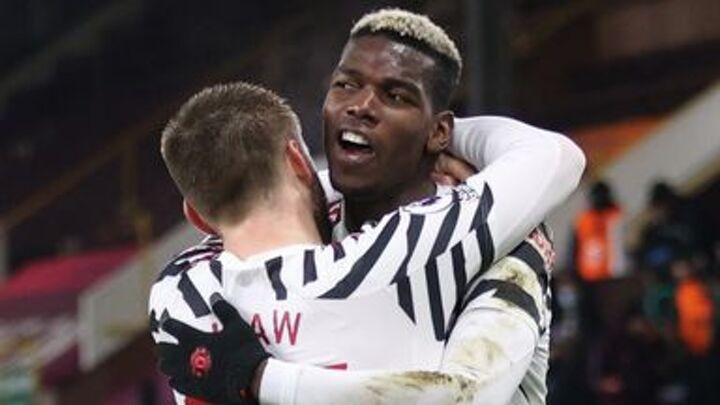 Paul Pogba has said players can find another way to "be happy" amid new Premier League protocols regarding goal celebrations.

Referees have been told to remind players of the need to maintain social distancing as much as possible during games, and when celebrating goals.

Manchester City boss Pep Guardiola conceded it will be "difficult" for players to follow the guidance, with Arsenal manager Mikel Arteta also expressing his concerns.

Speaking ahead of Manchester United's clash at Liverpool on Sunday, live on Sky Sports, Pogba - who contracted Covid-19 last year - said safety was of paramount importance.

"You find another way, you find another way to celebrate, to be happy," the France midfielder told Sky Sports. "But the most important thing is the result. Obviously there are rules and we have to respect that for the safety of everyone."

He added: "I did have it but that was when I was at home. That's not the problem, as long as everyone is safe, that is the most important thing."

Earlier this week, Sky Sports News confirmed reports in The Times that the Premier League and PGMOL have written to match officials, telling them to specifically discuss with captains and coaches what is expected of them in the game.

It comes as league officials become increasingly concerned breaches of coronavirus protocols and a lack of social distancing - particularly when celebrating goals - leaves football open to criticism, and vulnerable to a possible change in Government policy, where the game could be halted.

Speaking after City's win over Brighton on Wednesday, in which Phil Foden scored the winner and celebrated with the majority of his team-mates, Guardiola admitted it is "difficult" to follow the protocols as celebrating is an "instinct".

"We will follow what the Premier League says but I don't know if we will be able to do it," said Guardiola.

"I respect the Premier League protocols. I understand completely what they are trying to do. When we are indoors everyone respects social distancing. We have to do it. But outdoors, on the training pitch, after being tested many times, in the real moment of joy, [hugging] is instinct and reaction. It is difficult. I don't know if we will be able to do it."

Parker: I will remind Fulham players

Meanwhile, Fulham head coach Scott Parker has said he will remind his squad about the protocols after several players celebrated their equaliser together in the 1-1 draw with Tottenham.

"I feel like I'm probably going to," said Parker, when asked if he will speak with his players about celebrations.

"At the same time of course I understand the situation out there and protocols in play. Of course it's a conversation I will have with the players."

Arteta, speaking ahead of Arsenal's clash with Crystal Palace on Thursday, live on Sky Sports, also said players will not be focused on distancing rules in the intensity of matches.

"To control the emotions when you're going 200mph in a game full of things happening around you is very difficult to control," Arteta said.

"We ask in our players, in corners for example, to be man-marking people and pushing people around, and then we cannot fist-bump anybody or say hello to anybody.

"It gets a little controversial and difficult to understand."