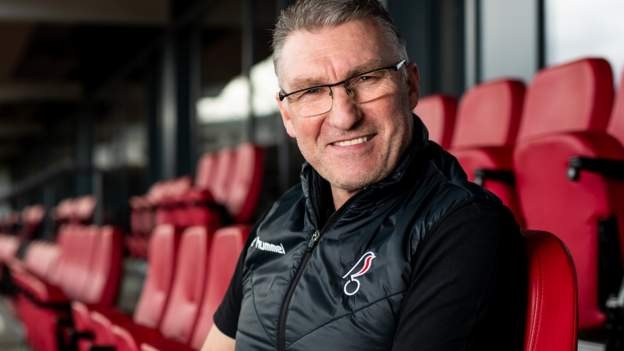 Nigel Pearson hopes to be in charge of Bristol City beyond the end of May.

The former Watford and Leicester City boss took over on Monday after Dean Holden's sacking and has agreed a deal that runs until the end of the season.

"When you make a decision so quickly there's an element of both sides being able to look at the situation," he told BBC Radio Bristol.

"But yes, I'm very pleased to be here and hopefully I'll be here for longer than the three months."

Pearson was first approached about the job on Sunday morning following City's 1-0 home loss to Barnsley and agreed a deal that evening and is the third man to manage the club in seven months after Lee Johnson was sacked last July after four years in charge.

The 57-year-old watched from the stands as the Robins ended a six-game losing streak with a 3-1 win at Middlesbrough on Tuesday which saw the club move up to 12th in the Championship, seven points off the play-off places.

'Finish in a healthy position'

City have not made the Championship play-offs since 2008 when they lost to Hull City in the final at Wembley, and while Pearson's first aim is to turn their poor form around, he did not rule out a push for the top six.

"First and foremost we need to finish this season in a very positive way and get as high a finish as possible," said the former Hull City, Derby County and Southampton manager.

"What that will be will be dependent on whether we can put together a positive run of results.

"Over the last few weeks there's been a tendency to cast more glances downwards rather than upwards.

"When you're mid-table as we are I think that is the nature of it. The Championship is always a very tight affair and I'm sure that if we can put a sustained run together, yes we can finish in a healthy position, and who knows, we may be able to push on higher.

"But first and foremost we've just got to make sure that our performances are of a high enough standard and with enough consistency to put together a positive run of results."