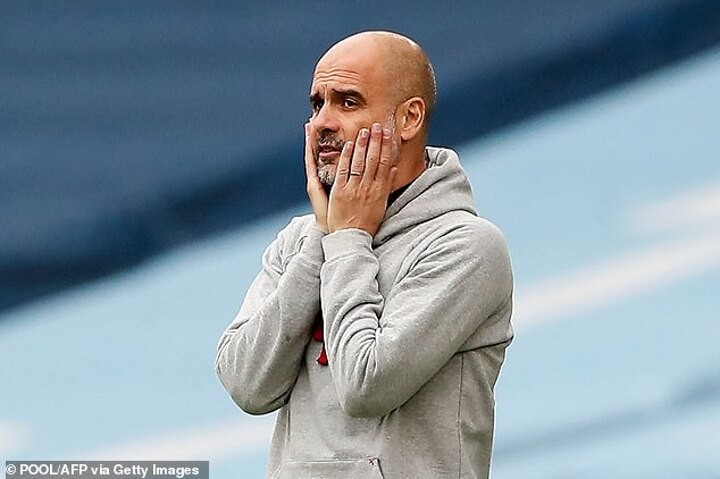 City were dominating the first half and had the lead through a Raheem Sterling goal when Aguero inexplicably tried a Panenka when taking a penalty just before half-time that may well have put the tie beyond Thomas Tuchel's men.

Instead the ball popped harmlessly to goal-keeper Edouard Mendy and Chelsea ended up winning the match thanks to goals from Hakim Ziyech and Marcos Alonso.

But speaking after the game, Guardiola refused to be drawn on his feelings about Aguero's miss.

'I have always said to him (Aguero), take one decision and take it full convincing, so he decided to do it this way,' he told Sky Sports.

'I have nothing to add.'

As well as Aguero's missed penalty, City missed several presentable chances throughout the match. Guardiola pointed to these costly misses, despite being relatively pleased with his side's performance.

'We missed our chance in the last minute of the first half for the penalty, but we were in a good position,' he said.

'We conceded a goal, suffered for 15 minutes, then reacted well, but in the end they scored.'

While inscrutable when speaking about Aguero, Guardiola could not contain his fury at what he believed should have been a penalty awarded to Raheem Sterling when the game was in the balance at 1-1.

Sterling went down under a challenge in the penalty area from Chelsea defender Kurt Zouma, but referee Anthony Taylor waved away City's appeals. VAR checked the incident and backed Taylor's decision.

But Guardiola was clear on his assessment of the situation.

'It's (a) penalty,' he said flatly. 'It has happened, football has happened, we will try the next time to score our penalty and that is all.

'The opinion for the officials and for Anthony, they know it, that is all I can say.

'Sometimes we make mistakes, maybe they believe they did not make a mistake, and that is OK.

Tuchel's Chelsea have now defeated Guardiola's side in both the Premier League and FA Cup, with the two teams meeting once again in the Champions League final on 29 May.

Guardiola insisted his team will be ready to take on the Blues for Europe's biggest prize.

'Now we are going to try to win the three points you need to be (Premier League) champions.'