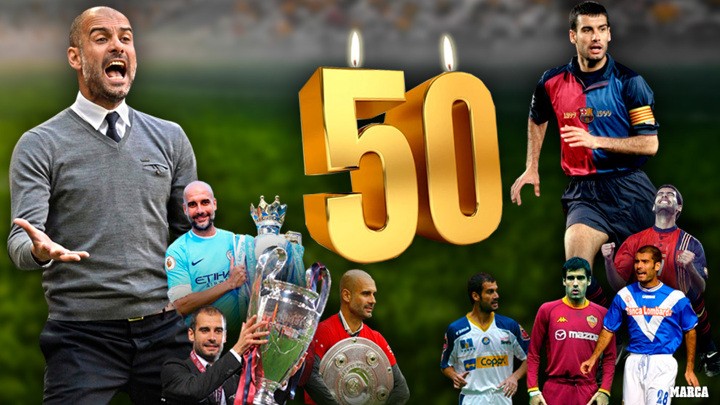 It has been a career in football like few others, achieving success as both a player and now a coach, yet as Pep Guardiola turns 50 years old, we can look at the 10 defining moments of his journey in professional football.

Johan Cruyff handing him his debut at 19

The first date that is circled on Guardiola's career calendar is December 16, 1990. That was the day he made his LaLiga Santander debut with the Catalan giants, as Johan Cruyff selected him to play in a 2-0 victory over Cadiz.

He would then play 378 games for the club, scoring 11 goals, contributing 37 assists and winning 15 trophies, the highlight of which being the 1992 Champions League.

Much has been written about Guardiola's relationship with Spain, but one of the highlights of his career was the 1992 Olympic Games where he helped secure gold in Barcelona, playing alongside Luis Enrique, Chapi Ferrer and co.

Winning the Champions League at Wembley

The Dream Team finally reached the zenith of their time together on May 20, 1992. Barcelona won their first European Cup after losing two finals in 1961 and 1986, but at Wembley they finally got over the line by defeating Sampdoria.

Saying farewell to Barcelona in search of new challenges

On April 11, 2001, Guardiola made the shock announcement that he was leaving the Camp Nou after 17 years with Barcelona.

"I am now 30, I'm a father of a family and my career is slipping through my fingers. I want to finish it abroad knowing new countries, new cultures and new leagues," Guardiola declared.

This journey led him to Brescia with Roberto Baggio, Roma with Fabio Capello, Qatar with Al-Ahli and eventually a spell in Mexico with Dorados.

His return to Barcelona

On June 21, 2007, Barcelona announced Guardiola was returning to the club to coach Barcelona B. Nobody knew then just what an impact this move would have on modern football, but Guardiola's coaching career was now in full swing.

He signed a two-year contract and in his debut year managed to get the B team promoted to the second division after a dismal relegation the year before.

Promoted to the first team and the sextet

Finishing 18 points behind Real Madrid and losing the Champions League semi-final to Manchester United in 2007/08 was a defining moment for Los Cules. Joan Laporta decided to make a change, and Frank Rijkaard was replaced... with Guardiola.

After just one year coaching Barcelona B, the former Brescia midfielder was thrown in at the deep end - and he didn't start well.

Barcelona lost to Numancia and drew at home to Racing Santander, but what came next is arguably the club's greatest period.

Barcelona won the first sextet in their history. Guardiola lifted the LaLiga trophy, the Copa del Rey, the Supercopa de Espana, the UEFA Super Cup, the Champions League and the Club World Cup.

Another Champions League at Wembley

Manchester United were once again on the losing side in a Champions League final against Guardiola's Barcelona side, but at Wembley in 2011 the English giants could have no complaints.

They could have had 14 men out on the pitch that night and still would have lost. May 28, 2011 will go down as the absolute zenith of Guardiola's time coaching the Blaugrana.

The team were perfect, they were impossible to play against and won 3-1 at an absolute canter.

A second farewell to Barcelona

Guardiola said goodbye to the Camp Nou for a second time in April 2012 when he announced he was leaving his post as coach.

He cited burnout and left the club with an impressive return of 14 trophies out of a possible 19.

On January 16, 2015, Guardiola's next step was made official as Bayern Munich confirmed he would replace Jupp Heynckes at the end of the 2014/15 season.

He may have failed to win the Champions League with the German giants, but his impact on the club and German football was profound, winning the Bundesliga title in every single season he worked at the Allianz Arena.

In a move that was almost a decade in the making, Manchester City finally got the coach of their dreams, and they would give him unlimited funds to be successful.

This journey is still ongoing, but thus far Guardiola has won two Premier League titles, breaking the points record in one of those seasons, although he has failed in the Champions League, not reaching a single final despite spending almost half a billion euros on his team.