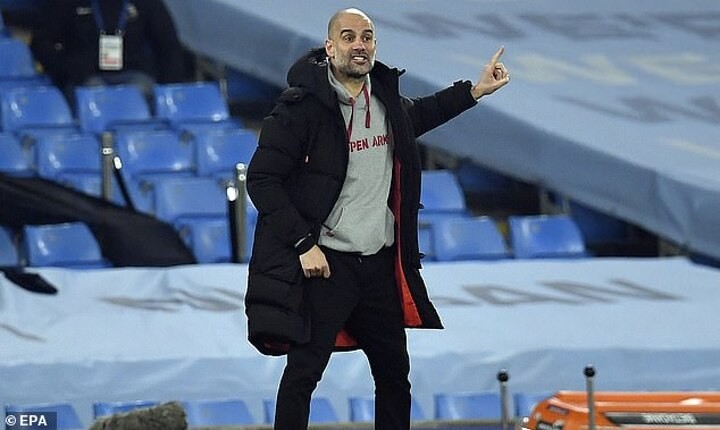 Manchester City manager Pep Guardiola joked off talk about setting records following his team's win against Wolves on Tuesday, simply replying 'Man United' when asked about the achievement of winning for the 21st time in a row.

A double from Gabriel Jesus, along with a Riyad Mahrez strike and a Leander Dendoncker own-goal, meant the runaway Premier League leaders came out on top at the Etihad - their 21st consecutive victory in all competitions, dating back to December 15.

They are now just two wins away from Bayern Munich's record from 2020 for consecutive victories from teams in Europe's top five leagues but Guardiola wasn't the least bit interested in talking about any records ahead of a Manchester derby on Sunday.

Asked about winning 21 games on the spin, Guardiola told BT Sport: 'Man United! That's all we care [about now].

'We'll look at records when the league is over so... Man United.

'The champions are Liverpool, the crown belongs to them. We are in the best position right now to take them out and we are going to try but they are the champions.

'There are 33 points to play for. Tomorrow our opponents will play, we have one or two days off and prepare for Manchester United at home.'

City extended their lead at the top-of-the-table to 15 points with Tuesday's win, ahead of United facing Crystal Palace on Wednesday evening.

Beyond the result, Guardiola insisted he was very satisfied with his side's performance against a Wolves side which did the double over them last season.

'Well deserved, fantastic game. It's so difficult to play against them,' Guardiola added.

'But we were fantastic, we play really well. We created a lot of chances in the end - yeah well deserved.'