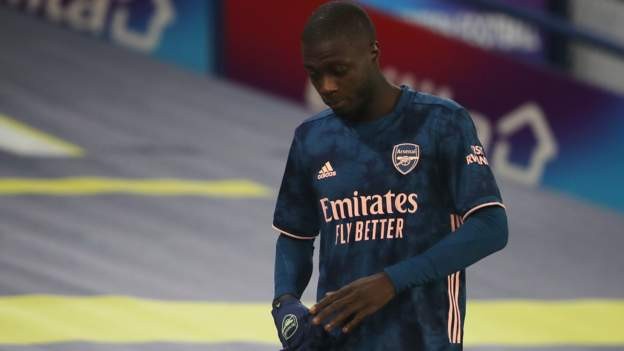 Nicolas Pepe's red card was the first of his career

Arsenal forward Nicolas Pepe was sent off for a headbutt as Leeds' wasteful finishing cost them a Premier League victory.

Marcelo Bielsa's Leeds squandered a host of chances, both before and after Pepe was dismissed after video assistant referee consultation for sticking his head into Ezgjan Alioski's face.

The Gunners were poor - yet again - and Pierre-Emerick Aubameyang's 60th-minute effort was their first of two shots on target.

They have scored one Premier League goal, an Aubameyang penalty against Manchester United, in five games since 4 October.

Both sides came into the game out of form - with three defeats in their previous four league games.

Leeds boss Marcelo Bielsa will be happy with his side's performance, bar the finishing, with opposite number Mikel Arteta relieved to pick up a point.

Arsenal remain in the bottom half of the table, moving up to 11th, two points above Leeds in 14th.

Leeds were the first promoted Premier League team to score 14 goals in their opening eight matches since Charlton in 2000.

They could have used some of those goals at Elland Road, with only four of their 25 shots on target.

Their three efforts against the woodwork all came from the 79th minute onwards.

Rodrigo's 18-yard shot hit the angle of bar and post, Bamford headed off the post and Raphinha crashed a shot off the same post late on.

Bamford had scored seven goals this season but did not look on song this time, with two shots straight at Bernd Leno in the first half.

Winger Raphinha, the first Brazilian to start a Premier League game for Leeds since Roque Junior in 2003, was lively and went close from the edge of the box, with Stuart Dallas forcing a good save from Leno.

On another day Leeds could have scored five, but they only have a point to show for their efforts and have only won once in their past six Premier League games.

The good vibes around Arsenal when they won the FA Cup and started this season with three wins in all competitions are starting to feel like a distant memory.

Arteta has helped to solidify their defence, but they have only scored nine goals in nine league games this season. That is their lowest tally at this stage since 1986-87.

Aubameyang got a rare chance to play as their main striker, with Alexandre Lacazette left on the bench - but Arsenal struggled to create many clear-cut chances.

He took an hour to test Illan Meslier, whose only other save was to deny substitute Bukayo Saka late on.

The Gunners did have a penalty appeal when Liam Cooper blocked an Aubameyang shot with his elbow but the VAR team ruled it was not handball.

Arsenal - who only had 33.7% of the ball - were hanging on, especially after Pepe's red card.

The Ivorian, who has rarely justified his £75m fee, had a running battle with Alioski and eventually lost his patience with a 'football headbutt'.

Alioski threw himself to the ground and Pepe was sent off for the first time in his career.

This was only Leeds' third goalless draw in 101 league matches under Bielsa.Since Bielsa took charge of Leeds in 2018, they have kept 41 clean sheets in 101 league games (excluding play-offs), more than any other side in the top four tiers of English league football in this time.Arsenal have failed to score in four of their last five league games, this after having only done so in three of Arteta's first 24 Premier League matches in charge.Leeds' 25 shots is the most by any side without scoring in the Premier League since Manchester City's 26 against Southampton in July. They are only the third side to have so many shots in the league this season.Since Arteta joined Arsenal in December 2019, the Gunners have received five Premier League red cards, at least two more than any other club in this time.

Raphinha (Leeds United) hits the left post with a left footed shot from the centre of the box. Assisted by Rodrigo.

Attempt missed. Rodrigo (Leeds United) header from the centre of the box misses to the left. Assisted by Stuart Dallas with a cross.

Kalvin Phillips (Leeds United) is shown the yellow card for a bad foul.

Dani Ceballos (Arsenal) wins a free kick in the attacking half.

Attempt missed. Mateusz Klich (Leeds United) left footed shot from the centre of the box is high and wide to the left.

Attempt blocked. Robin Koch (Leeds United) header from the centre of the box is blocked. Assisted by Mateusz Klich with a cross.

Patrick Bamford (Leeds United) hits the left post with a header from the centre of the box. Assisted by Ian Poveda-Ocampo with a cross.

Liam Cooper (Leeds United) is shown the yellow card for a bad foul.

Attempt saved. Ian Poveda-Ocampo (Leeds United) left footed shot from the right side of the box is saved in the centre of the goal. Assisted by Robin Koch.

Attempt blocked. Pierre-Emerick Aubameyang (Arsenal) right footed shot from the centre of the box is blocked. Assisted by Bukayo Saka.