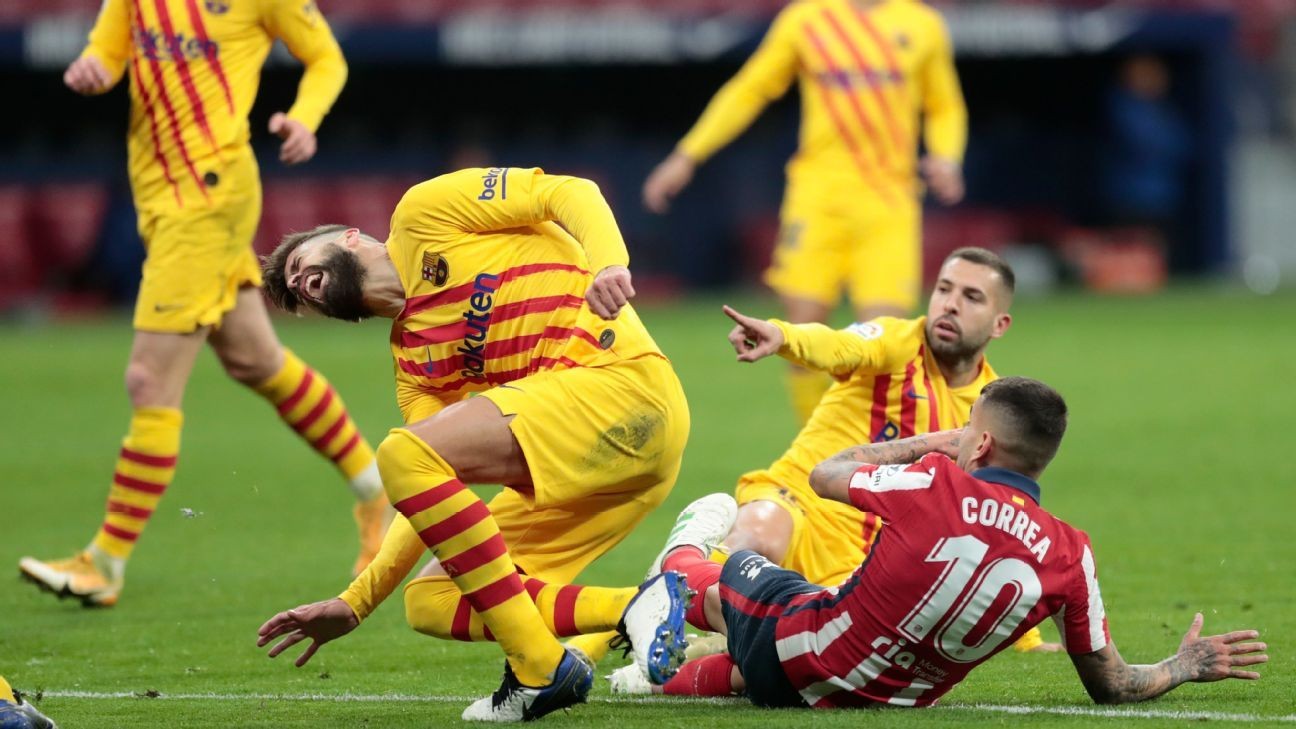 Barcelona have confirmed that Gerard Pique sprained his knee in Saturday's 1-0 defeat to Atletico Madrid as the club's injury crisis in defence worsened.

Pique, 33, will have further tests upon his return to Barcelona on Sunday to determine the severity of the problem. Club sources did not want to speculate on how long he will be out, but various media reports in Catalonia suggested it will be weeks, if not months.

Right-back Sergi Roberto will also have a check-up on a hamstring injury picked up in the final stages of Saturday's game.

Barca's Griezmann 5/10 against former club as Atletico muscle their way to victoryJoao Felix is La Liga's best player this season and Atletico Madrid, Portugal are reaping the benefitsMessi 'tired' of being blamed for Barca's problems

The loss of Pique leaves Barca with just one fit central defender -- Clement Lenglet -- for Tuesday's trip to Dynamo Kiev in the Champions League. Samuel Umtiti and Ronald Araujo are also currently sidelined with fitness issues.

For the fourth time in the last five games, midfielder Frenkie de Jong ended the loss against Atletico playing as a makeshift defender. The Netherlands international is likely to continue there in Kiev, although coach Ronald Koeman could also look for reinforcements in the B team.

Koeman is also currently without Sergio Busquets and Ansu Fati, who are also injured.

Saturday's reverse in Madrid was Barca's third loss in just eight league games this season. They sit 10th in the table with just 11 points.

"Like any coach, I am responsible," Koeman said when asked who was to blame for Barca's torrid run of results. "I will keep showing confidence in the players I have, but there are things we have to improve in defence and attack. We need to win a run of games."

Yannick Carrasco scored the only goal of the game at the Wanda Metropolitano after mistakes from Pique, before he went off injured, and goalkeeper Marc-Andre ter Stegen.

Koeman was fuming at the manner of the goal, which arrived just before halftime, but didn't want to single anyone out for criticism. "The way we conceded the goal in first-half stoppage time is worrying," he said. "A big team cannot concede a goal like that. It cannot happen.

"I don't want to blame players individually. It's a moment when you should never concede, when you have the ball. It was a big blow because we had done well in the first half. We controlled the game. We know it's hard to create chances against Atletico but at 0-0 it's completely different."

Atletico's win, their first against Barca in the league since 2010, moved them nine points clear of the Blaugrana.

"It's a big gap but there's a long way to go in the league and a lot of games," Koeman said. "We know every game is hard. But, after this game, we now have to go on a really good run."

While Barca struggle, Atletico have made an encouraging start to the season. They're unbeaten in eight games and, with 20 points, are joint top with Real Sociedad despite playing a game less.

Their form has drawn parallels with the title-winning side of 2013-14, although Simeone was keen to quash comparisons between the two teams.

"No, no I don't," he told a news conference when asked if he could see similarities between the sides. "The most important thing is the growth of so many players from last season to this one. You can see it.

"We need everyone, we need Felipe, who isn't getting as many minutes, we need [Renan] Lodi who's an important player for us, [Geoffrey] Kondogbia has come in, Saul Niguez is growing, [Angel] Correa is showing an extraordinary growth, and that's without speaking about [Joao] Felix or what Diego Costa did when he came on for 15 minutes, the whole group."