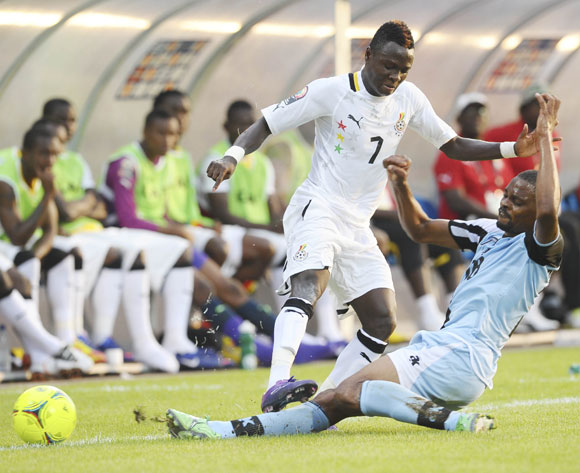 When Senegalese referee Badara Diatta, blew his whistle to bring an end to the 2012 Africa Cup of Nations (AFCON) Group D opener between Ghana's Black Stars and the Zebras of Botswana, those watching back home and around the world, would have heaved one big sigh of relief.

Relief because the Black Stars had to labour to a slim 1-0 victory after being reduced to 10 men in the 67th minute when the captain, John Mensah, was sent off for a professional foul.

Apart from that remarkable character exhibited by the Stars, the team also exhibited good possessive play (in the first half) and encouragingly scored from a set piece.

However, the team's lateral defence and crossing were weak on the day. That, in sum, was the general team play, but how did the individual Ghanaian players fare against AFCON debutant, Botswana? Here is how:

Kwarasey marked his AFCON debut with a clean sheet. Ordinarily, it should be thundering applause and more, but the applause is muted because his contribution to that clean sheet should be shared with John Boye who acrobatically cleared Moemedi Moatlhaping's certain goal off the line in the 52nd minute. On that occasion, Kwarasey clearly mistimed the cross and would definitely have been at fault had Ghana Conceded. He was not tested for greater parts of the game.

The experienced defender overlapped well, but he his delivery on crosses was below par, choosing rather strangely to turn the ball on his left foot before crossing. While he was making those incursions, he seemed to have forgotten his defensive duties and was caught for pace especially in the second half when the Zebras grew in confidence.

On the central defence pecking order, he was expected to be the last, but Ghana Coach Goran â€˜Plaviâ€™ Stevanovic must have seen something special in him to play him ahead of Jonathan Mensah and â€™â€™Boyeâ€™â€™ he did justify that confidence. He was quick to react, covered well for the full backs and was decent in the aerial challenges. He is the main reason why Ghana didnâ€™t concede when he made a timely intervention off the line in the 52nd minute.

What better way to lead your charges to a tournament than to open your teamâ€™s account with a goal. That is exactly what Mensah did when he tucked in an Asamoah Gyan back flick to register the Starsâ€™ first goal in the 25th minute. He was assured in defence and protected the rear commendably until his sending off in the 67th minute when he fouled Ramathlakwane who had been put clear on goal. The captain took one for his team and would be missed in the next game.

Starting strangely at left back, Inkoom was out of sorts. The Zebras realised this and pounded his area until he moved further up the field to right wing in the second half to fill Jordan Ayewâ€™s spot when the latter was substituted. Offensively, he made little impact there though he showed a lot of commitment by making several runs and tracking back to help Pantsil out.

The player, also known as â€˜Pablo Aimarâ€™, won his starting spot back in the team and almost did his job perfectly. Yes, almost. In his attempt to clear a ball, he headed back towards his own goal which resulted in the Mensah foul on Ramathlakwane for the formerâ€™s red card. But that would not mask his efficient output; closing down and distributing nicely in the middle.

Emmanuel had with little difficulty handling the Zebraâ€™s attackers and midfielders and seemed to find enough time and space to make his trademark surging runs into the opposition area. He however slowed down when the team went a man down, obviously having to work overtime to contain the motivated Zebras. His free kicks were however off on the day.

So finally, Dede walked out in the famous No. 10 jersey. Well, he put up a decent performance, playing out of the left wing and switching positions with his brother Jordan on the right wing. He possessed well and won a lot of free kicks for the team though sometimes he overly hang onto the ball, when he should have made a simple pass. He was substituted late into the game.

Sulley played behind Asamoah Gyan and he clearly enjoyed himself on the day, maybe a little too much because he looked languid at times and wasted a couple of free kicks. He tried a couple of long rangers which were blocked. He also tended to drift in too deep though he made some nice distributions. However, he lost steam in the second half and was aptly substituted.

He played on the right wing and switched to the left intermittently with his brother Dede. The young man however was lost in the game for a greater part but had a good hustle in him the few times he had the ball. He seemed to be finding his rhythm just before he was substituted.

There were doubts as to whether he had fully recovered from his injury, having returned earlier than expected. There were no such doubts about his performance as the Al Ain striker put in a good shift alone upfront. He wasnâ€™t just at the end of the attacks but created as well. It was in one of such situations that he flicked the ball on to John Mensahâ€™s path for the opener.

Masawudu Alhassan (5) - Looked lively but his recovery was slow when he overlapped and his crosses left a lot to be desired.

Jonathan Mensah â€“ (6) Nothing spectacular but ensured that the hole left by Mensah was fully plugged.

Mohammed Abu -Â  N/AÂ Â  He came on rather late and made little impact.