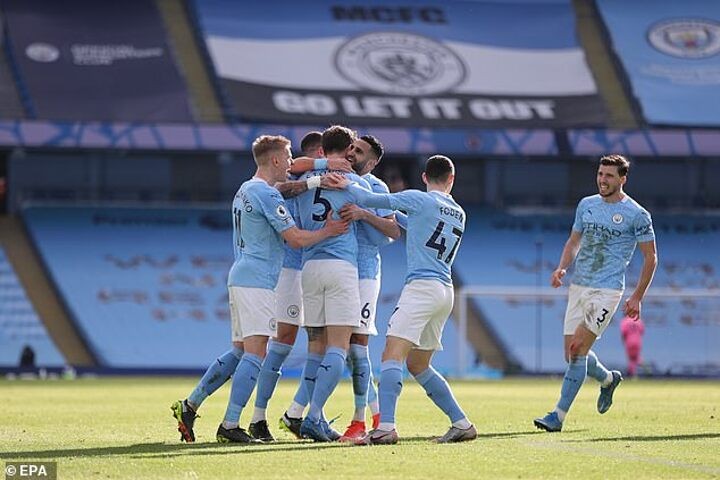 Manchester City pulled 13 points clear at the top of the Premier League table after a hard-fought win against Champions League chasing West Ham.

Ruben Dias and John Stones have been praised for their defensive work this season but came up trumps at the other end of the field to score for the hosts.

Their goals were sandwiched in between a Michail Antonio equaliser, which was not enough to prevent 20 straight victories for City, and here Sportsmail assess the performances of both sets of players at the Etihad Stadium.

Shaky early pass played Fernandinho into trouble but turned in a solid enough display without having lots to do.

Pace helped him out as West Ham threatened on the break, defended strongly but did not always use the ball well.

Great shot for the second goal showed the confidence in his game and displayed good concentration against the Hammers' dangerous counter.

First goal for the club was a brilliant piece of goal poaching and barely put a foot wrong at the other end of the field.

Pushed into the full-back turned central midfielder role that Cancelo has done so well and his passing was decent with a hand in the second goal.

Looked a little rusty in the opening minutes but his delivery for Dias's opening goal had to be seen to be believed.

Skipper played an important anchor role and made a number of key defensive contributions, one tackle on Lingard in particular.

One of the players of the season but kept quiet by Moyes' game plan and West Ham's organisation gave him no freedom until late.

Couple of explosive flashes in the first half troubled Johnson and his contribution for City's second was superb.

First league start in four months and left on the edge of things. Caught in possession from the City throw that led to the Hammers equaliser.

Sloppy in his passing and didn't track back for the West Ham leveller. Couldn't unpick West Ham's organised defence.

Late injury to Fabianski meant second league game of the season but injured himself kicking in the second half. Had no chance with the goals.

Caught back-pedalling to try and catch Dias for the opening goal, and missed a glorious injury-time header for a second equaliser.

The pick of the three centre halves with his reading of the game and tracking of City's mobile front men.

Brilliant defensive header cleared a Zinchenko cross that looked certain to be put in and showed composure on the ball.

His attacking from the right wing-back position gave City a headache and led to the equaliser. Did well defensively against Torres too.

Typical all-action performance and was alert to head a deflected Lingard chance towards Antonio for an early Hammers chance.

Important component in the Hammers' engine room with good passing and graft in front of his back four as they tried to stem the City tide.

Youngster showed inexperience against Mahrez and booked for a first half foul on him. Worked hard but beaten by Mahrez for the second.

Required to do so much defensive work but was still busy and alert to play a role in the equaliser.

His Hammers resurgence continued as the United loanee set up a great chance which Antonio struck against the post and an assist for the equaliser.

Target man had a key role to play as Hammers looked to relieve the pressure, hit the post and netted an equaliser.