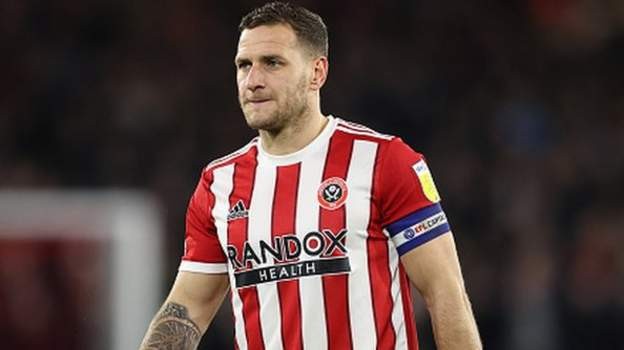 Police are investigating after Sheffield United captain Billy Sharp was assaulted by a fan at the end of their Championship play-off final second leg at Nottingham Forest.

Television footage showed the supporter charge at Sharp during a pitch invasion as the player stood on the sidelines.

Forest won 3-2 on penalties after the two legs finished 3-3 on aggregate.

"We've seen one of our players attacked," said Heckingbottom after the match at Forest's City Ground. "He's shook up, bleeding, angry.

"Bill was minding his own business off the pitch, trying to get our players away. He was blindsided, it was cowardly. He was knocked to the ground [and required] stitches, he was shook up."

Nottinghamshire police assistant chief constable Rob Griffin said: "Enquiries are under way to identify the offender and we will be looking to make an arrest as soon as possible.

"We have seen the footage, as many others will have who watched the televised match, and we are appealing for anyone who knows who the offender is to please get in contact with us as soon as possible.

"We have spoken to the player concerned and we are working with both clubs which are supporting us with our investigation, which will continue through the night."

In a statement, Forest said the offending fan would be banned for life.

They said: "Nottingham Forest Football Club are appalled to learn that our former player, Billy Sharp, was assaulted leaving the pitch after tonight's match at The City Ground.

"The club will work with the authorities to locate the individual in order they are held to account for their actions, which will include a life ban from Nottingham Forest.

"The club would also like to apologise to Billy personally and to Sheffield United Football Club."

After the game, Heckingbottom told Sky Sports: "How can you come to your place of work and mind own business and be assaulted in that fashion. It's bang out of order and everything that's wrong.

"You hear too many times that people condemn it, but nothing is done and we are the ones who suffer. It is upsetting for many reasons but it will be dealt with."

In January, the UK's football policing lead told the BBC that arrests at football matches across the top five English leagues were at their highest levels in years, with fan disorder "getting worse".