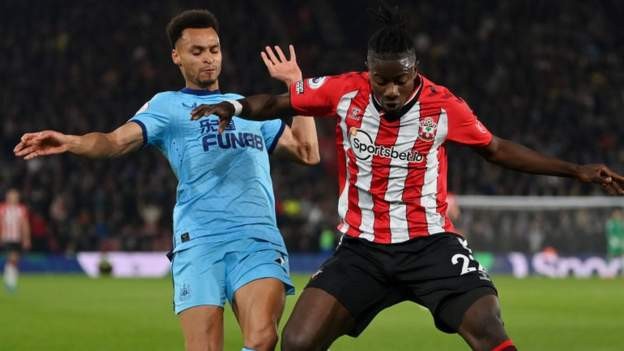 Premier League clubs could face a ban on having gambling sponsors on their shirts after the proposal was included in a draft white paper, sources have told BBC Sport.

Half of the Premier League's 20 teams have betting firms on their shirts, with the government set to update gambling laws next month.

Campaigners have welcomed the idea, but believe a ban would be "incoherent" if not also applicable to teams in the English Football League and for other adverts.

The move would follow a recommendation by a House of Lords select committee in 2020, which said Premier League clubs should face a shirt sponsorship ban, but Championship clubs should be given time to phase out their partnerships.

A Department for Digital, Culture, Media and Sport (DCMS) spokesperson told BBC Sport: "We are undertaking the most comprehensive review of gambling laws in 15 years to make sure they are fit for the digital age.

"We will publish a white paper which sets out our vision for the sector in the coming weeks."

Delays to the government white paper being published mean clubs might already be negotiating contracts for next season onwards.

That could mean any ban is likely to be applied for the 2023-24 season at the earliest, but there have also been discussions about whether Premier League clubs could offer to remove gambling sponsorship from shirts voluntarily.

The Premier League has previously said that "a self-regulatory approach would provide a practical and flexible alternative to legislation or outright prohibition."

The EFL, which is sponsored by Sky Bet, says a gambling sponsorship ban would cost clubs £40m a year.

James Grimes of campaign group, The Big Step, told BBC Sport: "This is welcome, but to remove gambling from shirts while allowing pitch-side advertising, league sponsorship and club partnerships to continue would be massively incoherent.

"Every young fan should be able to watch their club - in the ground and on TV - without being bombarded by ads for gambling, which we know harms millions, and takes hundreds of lives every year.

"If the government recognises gambling can be harmful, as this step suggests, then it must end all gambling advertising and sponsorship in football at all levels, not just on shirts."

A recent YouGov survey said 1.4m people in Britain are being harmed by gambling with a further 1.5m at risk.

But the Premier League and EFL believe there is no evidence to show a causal link between gambling sponsorship and problem gambling.

The Betting and Gaming Council spokesperson says that all sponsorships "must comply with strict guidelines and safer gambling messaging is regularly and prominently displayed".

It has also said it "strongly supports the gambling review as a further opportunity to raise standards".