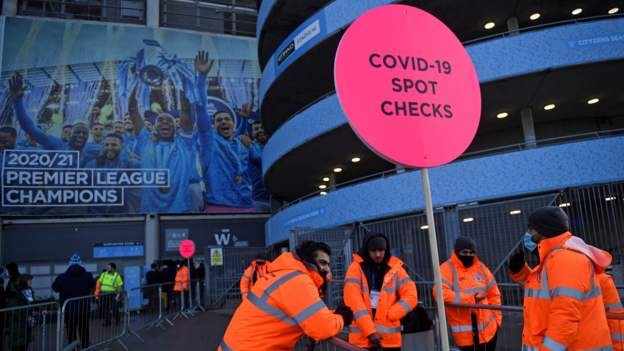 The number of positive Covid-19 cases in the Premier League has fallen for the fourth week in a row.

In the seven days up to and including Sunday 23 January, there were 16 new positive cases among players and staff, from 6,221 tests.

It is the lowest number of positives in a week since 5 December.

The Premier League said between Monday 17 January and Thursday 20 January, 4,131 tests were administered. Of these, there were 14 new positive tests.

Between Friday 21 January and Sunday 23 January, a further 2,090 tests were administered. Of these, there were two new positive tests.

A Premier League statement said: "The safety of everyone remains a priority and the Premier League is taking all precautionary steps in response to the impact of the Omicron variant.

"The league has reverted to its emergency measures, and has increased testing of players and club staff."

There have been no games called off in English football's top-flight since the Premier League granted Arsenal's request to postpone the north London derby with Tottenham, which was scheduled to take place on 16 January.