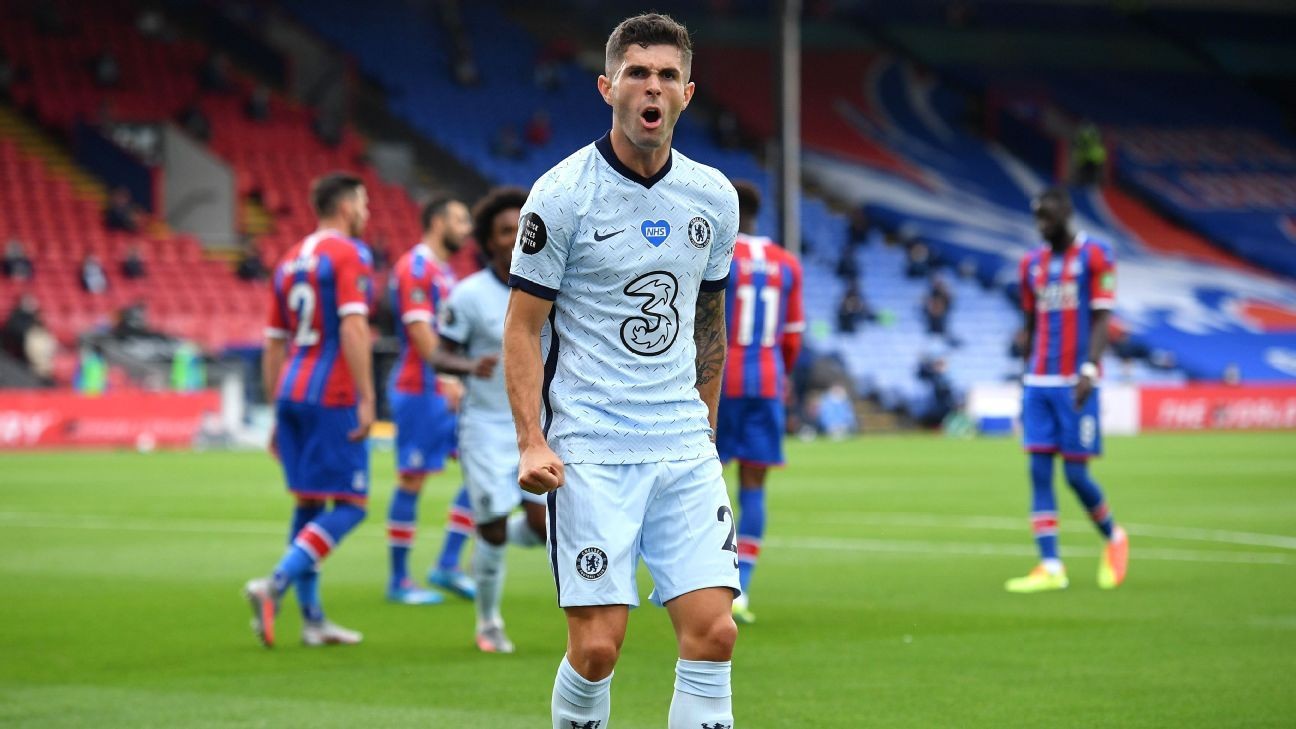 The Premier League is now halfway to completing 'Project Restart' after overcoming weeks of uncertainty to get competitive football off the ground again following the COVID-19 shutdown in March.

It has still not been a case of 'normal service resumed' due to games being played behind closed doors, increased substitutions and time-out style drinks breaks in each half. But while it has been a different kind of experience, some players have grasped the opportunity to shine and there have been some spectacular performances and form streaks.

ESPN has identified the hottest post-shutdown stars in the Premier League and why they have emerged from the break in such stunning form.

Nobody has shone quite as brightly as Chelsea winger Pulisic since the Premier League returned.

The U.S. captain took time to adjust to the pace and physicality of English football following his €64 million arrival from Borussia Dortmund last summer and was also held back by the lack of a proper break following international duty at the Gold Cup. But the three-month shutdown gave the 21-year time to recharge his batteries and take stock of his progress and he has emerged the other side with three goals and an array of outstanding performances.

Pulisic has been unfairly compared to former Chelsea winger Eden Hazard since his arrival, but with eight league goals this season, he is now just one behind the Belgian's total in his first Premier League campaign at Stamford Bridge in 2012-13.

Manchester United have unearthed a star of the future in Greenwood, who is on course to become the first teenager this century to score 10 goals in a Premier League season.

The 18-year-old went into Thursday's game at Aston Villa with eight league goals this term, with three of those coming in his last two games, against Brighton and Bournemouth. Since the restart, Greenwood has showcased his ability to score with both feet, but his goals have also been spectacular and audacious efforts.

Michael Owen was the last teenager to break the 10-goal barrier in a season, back in 1997-98, but Greenwood's form suggests he will emulate the former Liverpool and England striker.

The FC guys feel Man United have turned a new leaf, heaping praise on Mason Greenwood in the process.

Some players are so consistent and able to perform at the top of their game so regularly that it can be easy to overlook their contribution at the same time as heralding the similar achievements of others.

That often applies to Salah, but despite not creating major headlines since the restart, the Liverpool forward has still managed to hit three goals for the newly-crowned champions. The Egyptian sits third in the race for the Golden Boot, three goals behind leader, Jamie Vardy, who has hit 22 for Leicester this season.

Salah has broken the 20-goal barrier in the Premier League in each season since joining Liverpool from Roma in 2017 and he needs just one more to do so again this term.

Nobody has scored more Premier League goals since football returned than Manchester City's homegrown midfielder, who has hit four since the restart. The 20-year-old, nicknamed the "Stockport Iniesta" (after Barcelona legend Andres) is regarded by manager Pep Guardiola as the heir apparent to David Silva, who will leave the club when his contract expires at the end of the season.

Foden is now beginning to live up to the hype. He can pick a pass, run with the ball and score sublime goals, as he proved with his classy goal during the 4-0 defeat of Liverpool at the Etihad. He has now made 32 appearances in all competitions for City this season, scoring 7 goals. For those who believe he does not play often enough, the stats suggest he is beginning to get the game time he needs.

When Vardy performs, so do Leicester City and it appears that the Foxes' Champions League ambitions rest in the hands, or the goal scoring boots, of the former England striker.

The 33-year-old emerged from the shutdown with just two goals in 2020 -- both against Aston Villa -- and Leicester's form had taken a nosedive in tandem with Vardy's goal drought. But three goals in his last two outings, against Crystal Palace and Arsenal, have not only taken Vardy back to the top of the Premier League goal charts but also revived Leicester's Champions League hopes.

Vardy's equaliser in the 1-1 draw at Arsenal was a huge goal for Leicester and it could prove to be the one which sets them back on course for a place in the Champions League after a worrying mid-season wobble, for player and club alike.

play2:02Martial has potential to 'score 30 goals a season'

Few players can frustrate as often as Martial, with the Manchester United forward exasperating supporters, players and coaches with his inconsistency.

The France international can be hot in one game and ice cold in the next, but he appears to have tapped into his best form since the restart, with four goals in five games. Martial's hat trick against Sheffield United saw him become the first Old Trafford striker to score three in a game since Robin van Persie in 2013.

The 24-year-old has also shown the readiness to take on chances he would not normally attempt, so it is clear that he has returned from the three-month shutdown with new-found confidence.

You don't need to score a spectacular goal or produce a string of assists to be regarded as a man in form and that certainly applies to Burnley goalkeeper Nick Pope. With four games left to play, the 28-year-old is in pole position to win the Golden Glove for most clean sheets in the season and his three shut-outs in five games since the restart have enabled the England 'keeper to stay ahead of Liverpool's Alisson Becker and Manchester City's Ederson, who both have 13 so far.

Pope's calmness and reliability have seen him emerge as the best English 'keeper in the Premier League and, with Euro 2020 delayed until next year, he seems on course to dislodge Everton's Jordan Pickford from Gareth Southgate's XI ahead of the tournament.

The Arsenal captain has led from the front for Mikel Arteta's side since the restart, with goals, assists and true leadership of a team that is still being moulded by the new manager.

Despite uncertainty over his future -- the Gabon international's contract expires next summer -- Aubameyang has been the driving force of Arsenal's unexpected late surge for a Champions League spot. He has three goals so far since the restart and his two against Norwich saw him reach the 50-goal mark for the club quicker than Gunners legend Thierry Henry.

Aubameyang is also the senior figure in what is becoming a 'sorcerer and apprentice' relationship with 18-year-old forward Bukayo Saka. If Arsenal can keep Aubameyang, that could become a devastating partnership.

It says everything about the Manchester City midfielder that he could end the season by being voted the Footballer of the Year, despite the record-breaking performances of many of Liverpool's title-winning squad. De Bruyne has scored four goals, in league and cup, since returning to action and the Belgian is now just two assists short of equalling the record of 20 set by Thierry Henry during Arsenal's 'Invincibles' season in 2003-04.

Many regard the 29-year-old as the best player in the Premier League and his performances in recent weeks only serve to support that opinion. De Bruyne has already bagged another Carabao Cup winners' medal and, if he adds the FA Cup and Champions League to that, few could argue with him being declared the Footballer of the Year.

Until football was suspended, the Southampton striker was on course to break into the England squad for the friendlies against Italy and Denmark, with Gareth Southgate ready to assess him as a possible Euro 2020 pick. The 27-year-old has returned to action as though he has never been away, though, with three goals since the restart for Ralph Hasenhuttl's team.

Ings has now struck 18 Premier League goals this season -- with only Vardy, Salah and Aubameyang scoring more -- but the former Liverpool and Burnley striker has done it in a team that has struggled for the majority of the season. Having fought back from two serious knee injuries, Ings is making up for lost time with Southampton.

Back in January, Giroud appeared to be heading out of Chelsea after struggling to convince manager Frank Lampard of his merits, but the Frenchman has turned his situation around to the extent that he has now signed a 12-month contract extension.

The 33-year-old can divide opinion, but he has altered Lampard's plans by proving his worth as a scorer and creator, as well as being a player who is now showing the value of his experience. The former Arsenal forward has scored three goals since the restart and, alongside Pulisic and in-form Willian, is leading Chelsea's charge for a top four finish. His £18m fee when signing from Arsenal in January 2018 now looks like a real bargain.