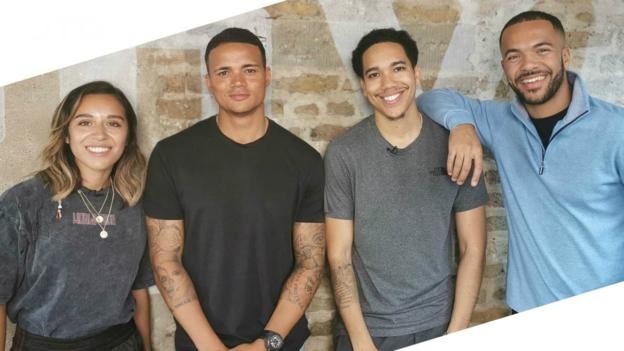 After making a stuttering start to the new season, the next test for Manchester United is the visit of in-form Leicester on Saturday.

How will United's new £80m centre-back Harry Maguire get on against his former club, with Foxes striker Jamie Vardy looking to maintain his electric form at Old Trafford?

"Maguire versus Vardy is going to be an interesting battle," said BBC football expert Mark Lawrenson.

"United are very up and down form-wise but it might help them that Leicester are unlikely to sit in and defend the same way Crystal Palace did when they beat United last month.

"So, there will be more space for United to exploit, but they will have to be careful because Vardy is such a dangerous player."

Lawro is making predictions for all 380 top-flight matches this season, against a variety of guests.

This week he is up against Chelcee Grimes, Craig Mitch and Reece Parkinson, co-hosts of the BBC's new football show, MOTDx.

MOTDx, which showcases the lifestyle and culture of the Premier League, starts on Thursday at 19:00 BST on BBC Two and is available on BBC iPlayer.

Chelcee, Craig and Reece will make their predictions on Friday.

A correct result (picking a win, draw or defeat) is worth 10 points. The exact score earns 40 points.

Newcastle's best performance of the season came in their win at Tottenham before the international break, when they circled the wagons.

I am sure Magpies boss Steve Bruce is going to set up his side the same way, camped in their own half to try to stifle Liverpool, but I don't see it working this time.

The Reds are playing extremely well, and they have got more ways of scoring than most other teams that Newcastle will face. Jurgen Klopp's side will find a way through.

You can already see how Brighton are a more adventurous side this season with Graham Potter in charge. Even in their defeat by Manchester City last time out, they had a bit of a go.

I think the players appreciate having the freedom to attack, and the Seagulls fans will definitely enjoy watching them.

It will be the same approach against Burnley, but I think the Clarets will be a tough nut to crack - they usually are.

Sean Dyche's side are a team that I don't expect to be in the top eight or the bottom six. They are in mid-table at the moment, and that is where I think they will finish.

Leicester are looking very lively and have made a positive start to the season, so this will be a test for United.

I am expecting Ole Gunnar Solskjaer's side to win at home, but United are such a disjointed team at the moment that we don't really know what kind of level they will be at.

Sheffield United have made the best start of the three promoted teams, and I've been impressed by what I've seen from them.

Chris Wilder's side have still got a physicality about the way they play, because the majority of the team is the one that came up from the Championship, but they are inventive to go with it.

I just think people might underestimate them a little bit. When they don't play well, generally, they are still difficult to play against - and if they can do that all season, then they will stay in the Premier League.

I think their good start will continue this weekend too. Southampton are another team who have had some very mixed performances and results this season, which is why I am backing the Blades to pick up another three points.

Tottenham have not really hit their stride yet, but they are still a good side and it is obviously a boost for them that they kept hold of Christian Eriksen.

This should be a good game, because Crystal Palace are flying high at the moment and have already won at Old Trafford this season.

It will be up to Spurs to break them down. They didn't manage that against Newcastle last month, but I think they will have more joy this time.

Chelsea have played well in parts of all their games so far, but they have been ordinary for parts of all of them too.

There is nothing wrong with the Blues' attacking play under Frank Lampard, but they have some improving to do at the back.

They make too many mistakes and are probably too easy to get at when they haven't got the ball, so it is imperative that they make more use of N'Golo Kante as a shield in front of their defence.

I am confident Lampard will get it right though. This is a tricky one for Chelsea, because I really rate Wolves and the way they play, but I just have a feeling the Blues will edge it.

Norwich do not lack a goal threat with Teemu Pukki in the team, but it is a concern to see them concede so many - 10 goals in four games so far.

That is especially worrying when they have to play Manchester City next, because we know how good Pep Guardiola's side are going forward.

It would be massive confidence boost for the Canaries if they can pick up a point here, but I just don't see it happening.

It looks like this season will be the same old story for Bournemouth - they will always score goals, but they have got a soft centre as well.

And while Everton have made a decent start to the season, I am yet to be convinced by them away from home.

So I am predicting goals - this fixture has served up some high-scoring thrillers in the past - and a Cherries win, just.

Quique Sanchez Flores is back in charge of Watford after Javi Gracia was sacked over the international break, and at least he will not need time to get to know his squad - there are still several players there from his previous stint in charge.

It is a surprise to see a manager sacked after four games of the season, then replaced by the man he had succeeded, but this is Watford. They don't follow the manual - they write it themselves.

But Sanchez Flores should give Watford a lift - I think he is one of the best managers they have had in the past few years.

But even allowing for the 'new-manager bounce' and the fact that I think we will see a reaction from the Watford players, I don't see them getting their first win of the season.

They will cause Arsenal some problems though. The Gunners have got lots of quality going forward but their defensive issues remain.

Unless they can play brilliant attacking football for 90-plus minutes, which is almost impossible, they are going to concede goals. That is where Unai Emery's side are at right now.

Aston Villa have only got three points to show from their first four games, but I have seen plenty of encouraging signs from Dean Smith's side. They are still settling down, but I think he has bought some very talented players over the summer.

Villa will also be angry after they were denied an equaliser against Crystal Palace last time out for what was judged to be a dive by Jack Grealish.

That is an example of how, with a little bit more luck, they would have picked up more points.

West Ham are improving too, and are unbeaten since the opening day, with new signing Sebastien Haller getting among the goals.

This one will be close, but I am going to go with Villa to make their home advantage count.

How did Lawro do last week?

From the last set of Premier League fixtures (before the international break), Lawro got five correct results, including one exact score, out of 10 matches for a total of 80 points.

He beat actor and comedian Stephen Fry, who got four correct results, with no exact scores, for a tally of 40 points.