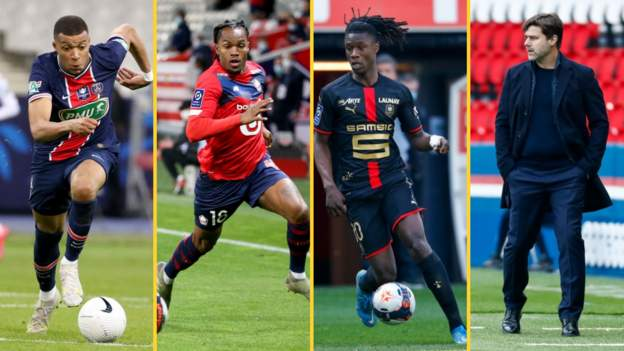 Lille stunned European football in May when they ended Paris St-Germain's Ligue 1 dominance by lifting their first title since 2011.

A summer of managerial speculation, big arrivals and potentially costly departures has followed in France, setting up an intriguing battle over the next few months.

As the season gets underway this weekend, BBC Sport looks at some of the major issues and whether Paris St-Germain can recover from a disappointing previous campaign.

Lille saw off PSG in the season's curtain-raiser - the Trophee des Champions - on Sunday, but is this a sign of what is to follow?

Having enjoyed a successful spell as a player with PSG, Mauricio Pochettino always felt like a sensible option as manager. Since replacing Thomas Tuchel in January, however, it hasn't been plain sailing for him.

Just 11 days into his reign, he won his first managerial trophy, overseeing a 2-1 victory over Marseille in a delayed Trophee des Champions.

But Lille's fairy tale success has piled the pressure on the former Tottenham Hotspur boss, who had even been touted for a return to North London.

An impressive dismantling of Barcelona in the Champions League last 16 showed glimpses of what his team are capable of - and he'll have a chance to get his feet under the table properly following some big-name signings and a new contract to 2023, which he signed in June. It could be win or bust, though.

With striker Kylian Mbappe looking likely to stay despite his contract running out next summer and Neymar motivated to succeed in France, PSG are looking stronger than ever in their quest for Champions League glory.

They lost the 2020 final to Bayern Munich before being outclassed by Manchester City in last season's semi-finals. Their squad looks stronger, deeper and more efficient already.

European football expert James Horncastle told BBC Radio 5 Live: "This is a big year for Paris. We have seen all the moves they have made. They really want to make a push for the Champions League."

Lille celebrate a first title in 10 years with their fansLille losing momentum ahead of title defence?

When a team punches above its weight, it is often difficult to match the same heights. Not long after a major triumph, their squad is dismantled as leading clubs lure their best players. With Ligue 1 sides still facing financial hardship after a broadcasting rights crisis, it is even more difficult to resist a sale.

Manager Christophe Galtier has also departed, taking over at Nice after four years in charge at the Stade Pierre-Mauroy. While 36-year-old striker Burak Yilmaz - who scored 16 league goals last term - has remained, it will be difficult for Lille to retain their title, especially while balancing Champions League commitments.

Rennes midfielder Eduardo Camavinga is one of the world's hottest propertiesWhat else can we look out for?

Marseille will be desperate to improve after finishing outside the top four and manager Andre Villas-Boas resigning over transfer disagreements.

Former Chile and Argentina boss Jorge Sampaoli is in, as are Matteo Guendouzi and William Saliba, both on loan from Arsenal. while winger Cengiz Under has also arrived on loan from Roma after a difficult temporary spell at Leicester.

Monaco finished third last time out and, under head coach Niko Kovac, will be looking to push harder for a first title in five years. With exciting youngsters like midfielders Aurelien Tchouameni and Sofiane Diop complemented by experience in the shape of Cesc Fabregas and a clinical goalscorer in Wissam Ben Yedder, they cannot be ruled out.

Rennes possess arguably the most exciting prospect in the country right now. But with teenager Eduardo Camavinga rejecting a new contract amid links to Real Madrid and Manchester United, they are going to face a battle to hold onto the 18-year-old. Rennes will join Lyon, with new boss Peter Bosz but not the departed Memphis Depay, and Nice in the race for a European spot.

At the bottom, only two sides will go down. Clermont, promoted to the top flight for the first time in their history last season, and Troyes, who came up as Ligue 2 champions, will be hoping to avoid that fate.