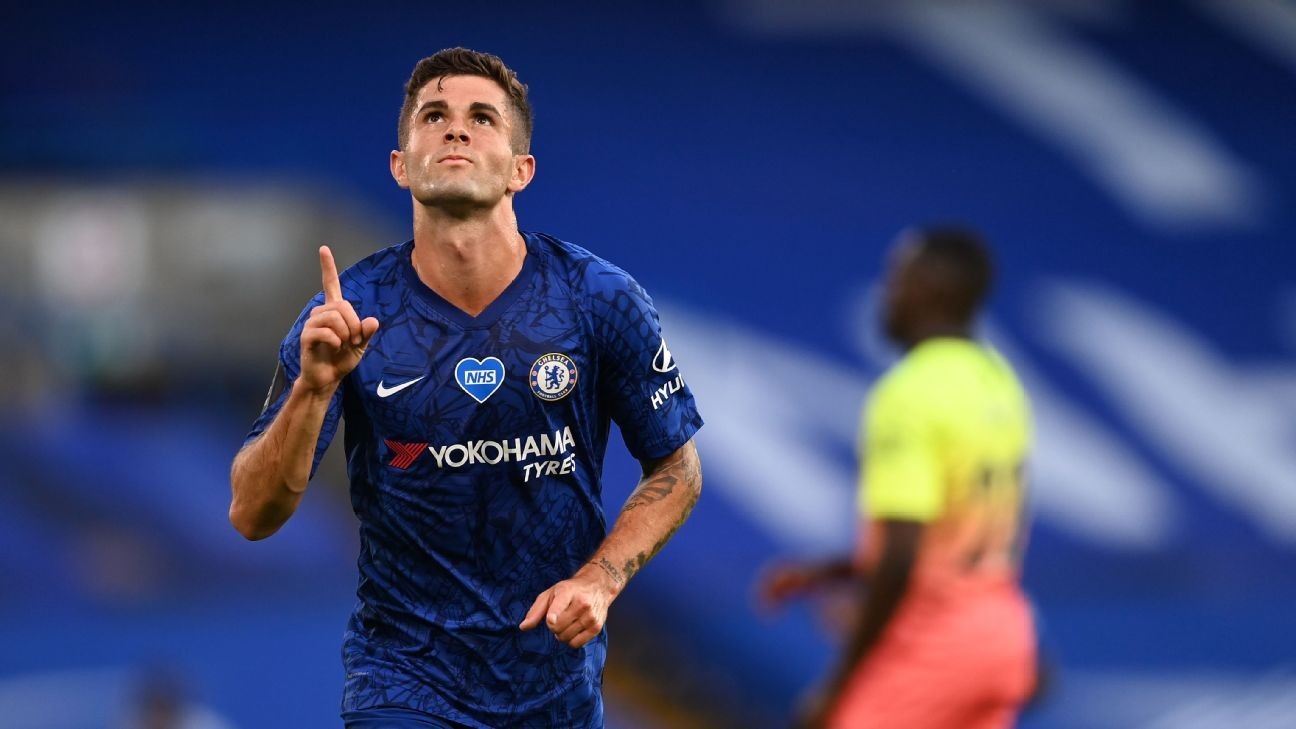 The jury is still out on the places Christian Pulisic and Willian could occupy in Chelsea's history, but given their scoring roles in a 2-1 win against Manchester City, both have become Liverpool legends.

The inevitable is delayed no longer: Jurgen Klopp's side may not be able to celebrate the club's first title in 30 years with their supporters but they can enjoy a tour as champions with more dates than some theatre runs in London's West End.

Liverpool's margin of victory with seven games to spare is a testament to their unrivalled mixture of class and consistency. It is also evidence of City's defensive fallibility and the yawning chasm the chasing pack must make up to create more of a contest next season.

The most encouraging thing for Chelsea is that, while this performance merely reinforced where City have fallen short, the home side produced evidence that they could bridge the gap and mount a sustained title challenge.

Injured at the start of 2020, Pulisic watched during the league's three-month lockdown as Chelsea quietly went about bolstering their attacking power. The American international arrived last summer as the heir to Eden Hazard's throne, a £58 million ($64m) lifeline for a club unable to sign players due to a transfer ban, yet a year later has watched as the club strengthens in the positions he wants to make his own.

Pulisic might have been alarmed further by being left out of the starting line-up at Aston Villa upon the resumption of play, but an equalising goal there preceded a place in the XI against City and he was not about to waste the opportunity.

Chelsea manager Frank Lampard targeted the acquisitions of Hakim Ziyech from Ajax and RB Leipzig forward Timo Werner after bemoaning Chelsea's wastefulness in front of goal. It is why the club continue to monitor Bayer Leverkusen's Kai Havertz, whose signing -- if completed -- would further alter the forward line.

The onus is therefore on those in situ to respond and Pulisic did just that on Thursday, capitalising on an error to give Chelsea the lead after 36 minutes. When Benjamin Mendy passed the ball into space rather than to Ilkay Gundogan, Pulisic took the chance to run at goal.

There was plenty to do from inside the centre circle in his own half, but a change of pace enabled him to breeze past Mendy and burst clear. Maintaining that unrelenting speed, Pulisic then curled a right-foot shot from the edge of penalty area, beyond Ederson and into the corner. The whole run comprised six touches. Composed, clinical, confident. Everything Lampard wants from his attacking players.

"I wanted to protect [Pulisic] a bit against Villa, see if he could make an impact," Lampard said. "I always planned to start him against City because I know what he can bring in these sort of games and he brought it. He did really well. He needs to keep working. He's a young player but with so much talent, he can get better and better."

The opening goal came at a time when the hosts were just starting to find ways around the City press. Lampard shouted his orders from the touchline, coaching his players through practically every moment of those intense phases after Pep Guardiola's side initially appeared likely to pass Chelsea into submission on a hot evening in London.

The second half followed a similar pattern. City began strongly in search of an equaliser, albeit blunted by the lack of a potent centre-forward in Sergio Aguero's absence. Guardiola opted for Bernardo Silva as a false nine but abandoned the plan 10 minutes after the break, introducing Gabriel Jesus and David Silva for Rodri and Bernardo.

It was Kevin De Bruyne, however, who hauled City level with a 55th-minute free kick of such irresistible power and placement that Chelsea goalkeeper Kepa Arrizabalaga could only fall to his knees in response after the ball flew past him.

Knowing they need a win to delay Liverpool's party, City continued to live dangerously at the back. Pulisic almost scored a second after rounding Ederson and steering a shot goalward, but Kyle Walker somehow scrambled it off the line.

Chelsea's substitutes, amassed in the bottom tier of the East Stand next to the dugout, cried for video technology to intervene, but referee's Stuart Attwell's watch did not buzz. With 12 minutes to go, though, VAR intervened in decisive fashion.

Willian burst clear down the right and found substitute Tammy Abraham, whose shot was saved by Ederson. As Pulisic and then Abraham tried to force the ball over the line, Fernandinho shovelled the ball away with his left arm.

Attwell missed it, but Craig Pawson at Stockley Park did not. In a week that saw Lampard hail Willian's professionalism and impact on younger players, the Brazilian international stepped up to slot home the winning penalty that consigned City to their fate and left Chelsea savouring a vital win in pursuit of Champions League football.

Willian has won five major honours with Chelsea but news he had extended his contract until the end of the season got a mixed reaction, even more so the possibility of signing a new deal to stay beyond that. Six years on from writing the epitaph to Liverpool's title challenge with a goal in Chelsea's win at Anfield, though, the winger landed the decisive blow in the Anfield club's maiden Premier League success.

"I'm delighted with Willian this season," Lampard said. "The players look up to him. He's a senior professional within the group but he has quality, he has work ethic and it was a continuation of his form for big parts of the season."

Chelsea are addressing their flaws, though whether that improvement can extend to titles challenges remains to be seen. City, albeit starting from a higher level, have to do the same.