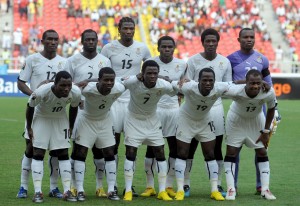 Puma will unveil Ghanaâ€™s jersey for the 2012 Africa Cup of Nations in London on Monday.

The new style of the Black Stars jersey for Januaryâ€™s tournament will be seen in public for the first time at the event.

Ghana FA boss Kwesi Nyantakyi has been invited to the to see what will be on display by the German sports good manufacturer.

Ivory Coast, Senegal and Burkina Fasowill also have their jerseys unveiled there.

Some players from these countries sponsored by the German sports goods manufacturer will also attend the event.

Some federation presidents of the aforementioned countries have travelled toEnglandfor the event.

Puma is expected to answer pressing concerns over the availability of these jerseys for the African-based fans of these teams.

The German firm has been criticized for not making the apparel readily available to fans of the various African teams.

There have been complaints from fans of the Black Stars in the past over the quality and style of the designs forGhana.

Fans have been worried that no consultations are held with the Ghana FA or fans before colours of the jerseys or styles are released.

Also availability of the jerseys for purchase has been an issue for the fans to purchase online or in shops across the country which has sparked the trade in fake Puma Ghana jerseys.

Despite these concerns, Pumaâ€™s sponsorship of the Black Stars has been beneficial in financial terms since it signed Ghana in 2005.