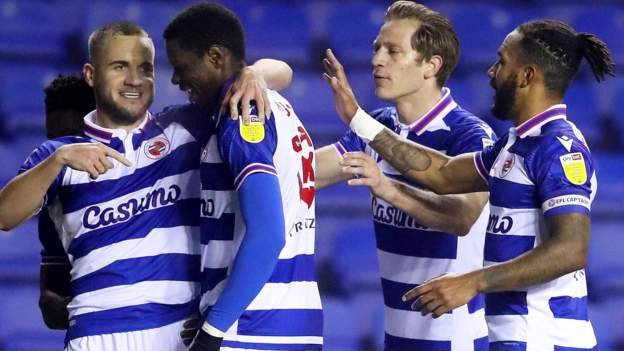 George Puscas marked his return to Reading's starting line-up with the only goal in their win against Blackburn Rovers.

The Romania striker was gifted time and space for a finish midway through the first half after Lucas Joao unselfishly picked him out.

It proved enough to end a run of three straight home defeats for Reading and helped consolidate their place in the top six.

Blackburn struggled to put the hosts under any concerted pressure and are now without a win in seven league games, having lost six of those.

Puscas was the only change for Reading from their win at Rotherham on Saturday and his impact was almost immediate.

He nearly marked his return to the side with a goal from his side's first attack, but his powerful near-post header from Andy Yiadom's cross was palmed over by Thomas Kaminski.

The former Inter Milan striker then went close with an audacious effort from the halfway line which nearly caught Kaminski off his line, but much to the Rovers goalkeeper's relief, the ball landed on the roof of the net.

However, he was not to be denied when handed a gift of a chance as first Ovie Ejaria stole the ball from a hesitant Harvey Elliott inside his own half and fed top-scorer Joao, who squared for Puscas to slot home from 12 yards.

Blackburn tried to mount a response, but Veljko Paunovic's side were largely untroubled at the back despite losing centre-back Michael Morrison through injury towards half-time.

Striker Adam Armstrong missed a couple of chances to draw them level in the second half, sending a half-volley narrowly wide from the edge of the penalty area, and then again in stoppage-time when he failed to hit the target from a Barry Douglas cross.

Ben Brereton was also denied by a couple of saves in either half by Rafael, while skipper Darragh Lenihan should have done better when found unmarked with a header from six yards out.

Rovers stay 15th despite the defeat, but Tony Mowbray's side now find themselves 13 points adrift of the play-off places, while Reading strengthened their grip on fifth and are six points behind the automatic promotion spots.

Attempt missed. Adam Armstrong (Blackburn Rovers) left footed shot from the centre of the box is close, but misses to the left. Assisted by Barry Douglas with a cross.

Thomas Holmes (Reading) wins a free kick in the defensive half.

Attempt missed. Tyrhys Dolan (Blackburn Rovers) right footed shot from outside the box is high and wide to the left. Assisted by Bradley Dack.

George Puscas (Reading) wins a free kick in the defensive half.

Attempt missed. Ryan Nyambe (Blackburn Rovers) right footed shot from the right side of the box is close, but misses to the right.

Attempt saved. Ben Brereton (Blackburn Rovers) right footed shot from outside the box is saved in the centre of the goal. Assisted by Taylor Harwood-Bellis with a headed pass.

Attempt missed. Darragh Lenihan (Blackburn Rovers) header from the centre of the box misses to the right. Assisted by Stewart Downing with a cross following a set piece situation.