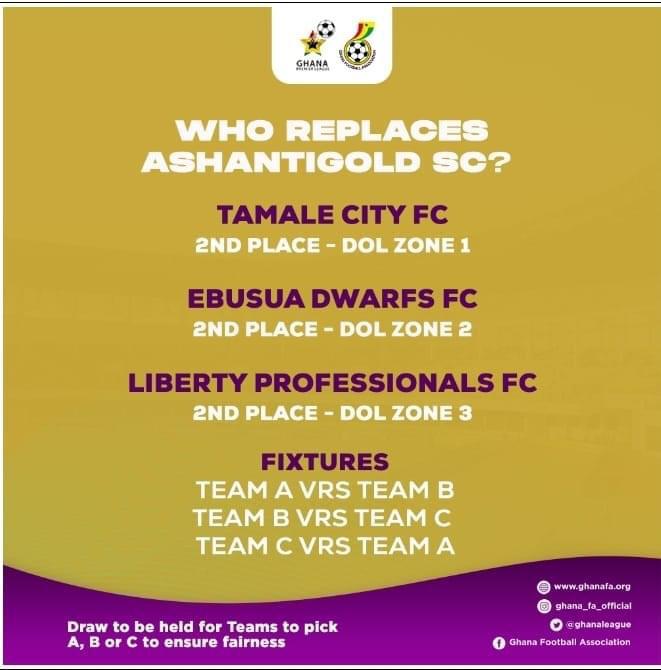 In its quest to replace demoted Ashantigold for the next Ghana Premier league Championship, the Ghana Football Association is taking an unprecedented action never seen in World Football where a Lower tier side is asked to replace a Top tier side in any circumstance.

The action and decision of the Executive council makes no sense in Footballs hierarchical imaginations as the 3 Division one sides the GFA is calling have no relationship with the League under re review.

It must be emphasized that there is no relationship between Premier League Clubs and division one league clubs except Promotion and demotion which is captured in article 7 of the Ghana Premier league regulations, where as the Division one league Regulations is explicit of Champions getting promoted to the Premier league. [Which has been decided already].

Any attempt to promote anymore clubs from the Division one must come from the Congress of the GFA in a Special resolution or Regulations.

The Actions of Ashantigold and International Allies affected teams in the Premier League, and if there is any side to benefit from the effects of their actions, it should be teams from same competition and tier.

The situation at hand is no unique to the Ghana FA, Several Leagues and Associations have found themselves in this circumstance, and all the Ghana FA needed was to follow Internationally best accepted practice.

In the 2005-06 Calciopoli scandal in Italy that saw Juventus demoted to the Serie B, the League recalled relegated Messina to fill that void, the FICG did not go beyond the teams in Serie A to engage lower tier sides to fill that gap left by Juventus.

In 1992 when UEFA suspended Yugoslavia from competing in the Euros, Second placed Denmark was asked to take their place in the Championship, [which they eventually won].

There is no known record of a league or competition where a Lower tier side has been asked to replace a team in the top tier, and the Ghana FA's Decision to replace Ashantigold with teams from the Lower division is a slap in the face of the Premier league.