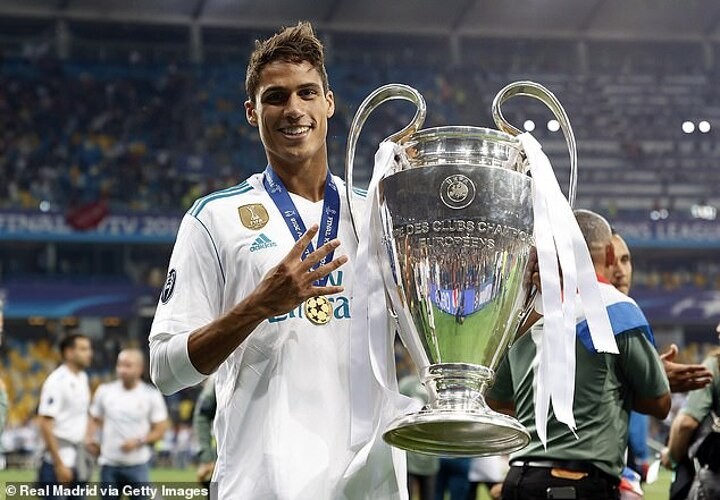 Manchester United have lost four semi-finals and one final under Ole Gunnar Solskjaer. They have finished second and third in the Premier League.

The Norwegian played for United during a time when winning silverware came as naturally as breathing; when there existed a culture of success at Old Trafford and the mentality to go with it.

That's why reports suggesting United are in talks to sign Raphael Varane from Real Madrid are so encouraging for their supporters.

The French defender is a proven winner. At 28, he already boasts an enviable medal collection and still has time in his career to win everything all over again at United.

Varane has played in a dozen finals for Real Madrid and has won every single one of them. He played every minute of France's victorious 2018 World Cup campaign, too.

At this moment in time, as Solskjaer's United continue to stumble at the final hurdle, it is players of the calibre of Varane that are urgently required to drag them over the line.

It is not only Varane's qualities as a centre-half and how they would complement Harry Maguire and United's existing defenders but that winning pedigree, that strength drawn from having been in those crunch scenarios before and prospered.

Varane, who has one year remaining on his Bernabeu contract and so would have to be sold this summer for Real to make any profit, isn't outwardly a natural leader of men.

His character is very quiet and reserved, he has never been like Sergio Ramos or Marcelo in leading Real Madrid, but his assuredness as a defender and a serial champion would be a major boost to United's dressing room.

Of course, we can't discount the possibility that Varane will use United's interest to negotiate a bumper new contract with the Spanish club, much as Ramos did a few years ago.

But it isn't hard to understand why the Frenchman is United's No 1 target as they look to plug what has at times been a glaring hole in the middle of their defence.

There are parallels between the dynamic of Ramos and Varane at centre-half for Real Madrid and how Varane could combine with Maguire as United's first-choice defensive partnership.

Ramos provided the vocal leadership and also the impetus by carrying the ball out of defence to start Madrid moves.

Real's captain also liked to make forward charges into the opposition box if they were chasing the game. This sounds very similar to Maguire on all counts.

Varane was more than happy to step across and fill the gaps this left behind, knowing his pace and intelligence of positioning could head off any danger.

His natural speed to get back and cover also explains his appeal to United. Maguire, for all his strength in the air and adeptness stepping out of defence, isn't the quickest.

Several opponents exploited United's sluggishness at the back last season by running directly at Maguire and Victor Lindelof or setting up a foot race with balls in behind.

As Rio Ferdinand, one of the last world class defenders United had, said recently: 'When I've seen Man United have problems and in trouble in games, a lot of the times teams have been given a vote of confidence or they've seen a chink in the armour of Man United.

'When they can get people one versus one or play the ball over the defence or over the press into one of the channels, then it's a race. We haven't got the players quick enough to be able to do that in the centre-back areas.

'If we get someone like him, people start thinking, "we ain't going to play the ball over the top because Varane will eat that up."

While Lindelof has improved with Maguire alongside him, serious question marks remain, not least over his heading ability. United sorely missed Maguire when he damaged ankle ligaments at the tail end of last season.

It isn't hard to see how Varane would be a major upgrade on Lindelof, Eric Bailly or any of United's other defenders, even if it would obviously take time to form a rapport with Maguire.

Varane always seemed to carry a maturity greater than his years. He was just 17 when he made his professional debut for Lens in France and it wasn't too long before Real, identifying a future star, made their move.

Indeed, when then sporting director Zinedine Zidane first called Varane to express Real's interest in signing him, the teenager asked him to call back as he was revising for his baccalaureate exam.

Though young, Varane recognised his life had changed forever after making the £8m switch to Real in the summer of 2011.

'I told myself that I couldn't go to the cinema at eight in the evening anymore,' he told Marca in 2019. 'When I arrived at the airport and saw so many journalists, I knew that Madrid was something else.'

Fortunately, Varane possessed the sensible head to not only cope but prosper in the pressure cooker that is one of Spain's foremost clubs.

His family kept him grounded. Varane married long-term partner Camille Tytgat in 2015 and then have a son, Ruben, and daughter, Anais.

Varane's Instagram posts are more likely to be family snaps, often in garish Dolce and Gabbana outfits, than videos of himself out partying.

As early as 2014, Jose Mourinho hailed him as the 'best defender in the world' while Real legend Fernando Hierro, the man to whom Varane was often compared, admitted he had been surpassed.

By his mid-twenties, Varane had realised most of his footballing dreams thanks largely to Real's spell of European dominance during Zidane's first spell as manager.

Injury precluded him from Euro 2016, when France lost in the final to Portugal, but he more than made up for it by being their defensive rock at the 2018 World Cup in Russia.

He was 25 when, that year, he won the Champions League and the World Cup in the space of a few weeks. It's the kind of summer many of United's players can only currently dream of.

With all that already on his CV, Varane is well-placed to accept a new challenge whether in the Premier League or elsewhere.

With Real buffeted by financial constraints, he would certainly increase his earnings in Manchester and English football would offer a whole new set of challenges.

Varane described Zidane as 'someone who doesn't let me stay in my comfort zone', suggesting he is someone open to testing himself and self-improvement.

The task of making Manchester United resolute at the back, of helping them restore past glories, could therefore be an enticing one.