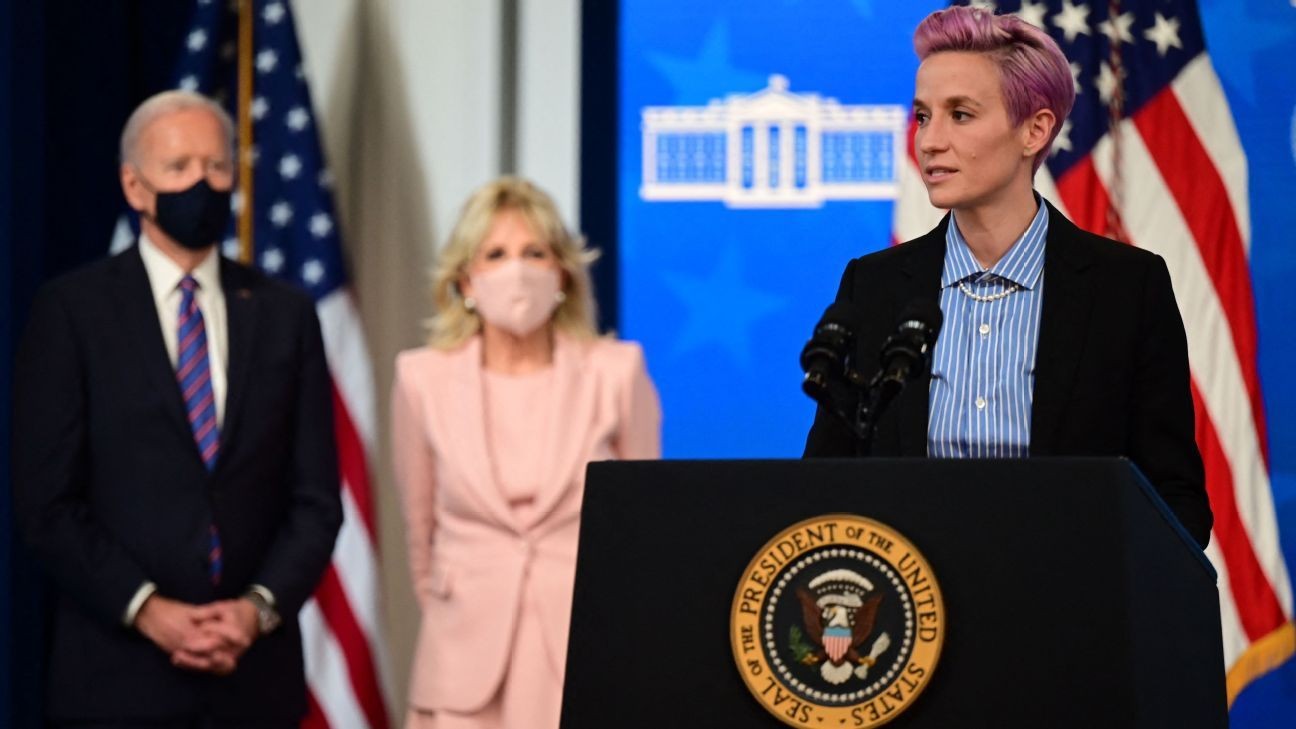 The Supreme Court on Friday voted 5-4 to overturn Roe v. Wade, a decision expected to lead to abortion bans in roughly half the states. The ruling came more than a month after the leak of a draft opinion by Justice Samuel Alito indicating the court was prepared to take this momentous step, and it was supported by the court's conservative majority.

Rapinoe was among the athletes Friday to speak out against the ruling.

"I wish that we could just talk about soccer today, but obviously with the ruling on Roe v Wade that takes precedence over everything is hard to put into words," Rapinoe said during a USWNT availability ahead of Saturday's friendly against Colombia at Dick's Sporting Goods Park in Commerce City, Colorado. "How sad a day this is for me personally, you know, for my teammates, for just all of the people out there who this is going to affect.

"We know that the lack of abortion does not stop people from having abortions. It stops people from having safe abortions. I would encourage people to understand all of the different aspects that overturning Roe v Wade will have on so many, actually on everyone in the entire country. I just can't understate how sad and how cruel this is. I think the cruelty is the point, because this is not pro-life by any means."

Alito, in the final opinion, wrote that the original 1972 decision on Roe and a 1992 decision reaffirming it (Planned Parenthood v. Casey) were "wrong the days they were decided and must be overturned."

Alito wrote that the authority to regulate abortion rests with the political branches of government and not the courts. The decision leaves it up to the states.

Three of the court's liberal justices wrote in a joint dissent that the decision would bring "sorrow" for the many millions of American women who will be losing a "fundamental constitutional protection."

In a statement, the National Women's Soccer League wrote that the ruling "denies individuals in this country the full liberty and equality that is the cornerstone of a just society."

The statement added: "Reproductive rights are human rights. Until every individual has the same freedoms as their neighbor, our work is not done. We will continue to make our voices heard."

Rapinoe's UWSNT teammate Lindsey Horan called the decision a "step backwards for our country," adding that she was "shocked and still trying to take it all in."

Their coach, Vlatko Andonovski, offered his full support to his players.

"Being in an environment with these female athletes, I feel that it's my responsibility to support them with everything that I have right now. I want to be there for them," he said.

Rapinoe, who is engaged to WNBA star Sue Bird, said through tears she is "scared" about what the future holds following Friday's decision.