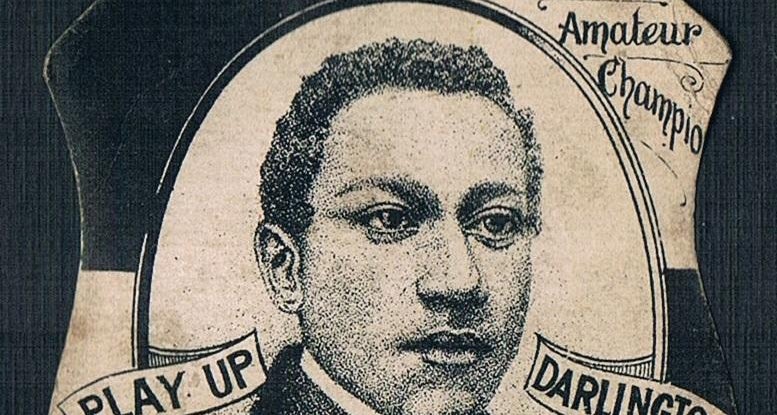 The football card commemorating Arthur Wharton is believed to be the first such collectible ever produced. Picture: Carl Wilkes
Share

Now, amid rising interest in the black footballing history of Scotland and the rest of the UK, a rare football card commemorating the achievements of one of its pioneers has been tipped to rewrite the record books.

Arthur Wharton, who hailed from Scottish and African heritage, was one of the first black professionals in the British game.

Born in 1865 in Jamestown in the Gold Coast, now part of Accra, his mother was Annie Florence Grant, herself the daughter of a Scottish merchant and a Ghanaian woman. His father, Rev Henry Wharton, also had Scots heritage.

The young Wharton was a gifted sportsman, and equalled the amateur world record for the 100 yard sprint. But it was on the football pitch where he truly excelled.

After moving to England aged 19, he impressed between the goals for Darlington, then an amateur side, and was spotted by Preston North End. He went on to play a starring role in the Lancashire team’s run to the semi-finals of the FA Cup in the 1886/87 season.

Though he was lauded for his goalkeeping skills, he disappeared from public life after retiring from the game, becoming a haulage hand at Yorkshire Main Colliery and joining the Home Guard during World War I.

He later fell into destitution and alcoholism. After his death at the age of 65 in 1930, he was buried in a pauper’s grave.

After being ignored for decades, Wharton’s legacy has been rediscovered and celebrated in recent years. A memorial headstone now graces his final resting place, and since the turn of the century, a host of statues, murals, and foundations have been raised in his memory.

Yet one of the earliest commemorations is the most elusive - a card printed by John Baines, a Yorkshire toy retailer who produced the first collectable football cards.

In 1885, the year of Wharton’s debut, Baines produced a card featuring the Ghanaian immigrant. It is recognised as the first such collectible card ever released.

An image of the card, reproduced in a new book, ‘Glove Story 2’, which celebrates the history of goalkeeping, shows Wharton in his Darlington pomp.

In October, a Swedish-produced card featuring Pele sold for more than £220,000, making it the most expensive football card in history. But according to a leading experts in the field, Wharton's card will eventually fetch even more.

It is unclear how many of the Wharton cards exist, but one is owned by Carl Wilkes, the author of ‘A to Z of Football Collectibles: Priceless Cigarette Cards and Sought After Soccer Stickers’.

He explained: “Very rare cards are currently enjoying a period of almost exponential growth, but I believe they are due a further leap in value.

“Only one or two Wharton Baines cards are known to exist, different cards, each of them. Mine is one of one, as far as I know.

“Soccer is growing faster than any other sport as a world collectible. Americans are moving into it big time.

“Wharton will be the first million pound soccer card, and hopefully sooner rather than later.”