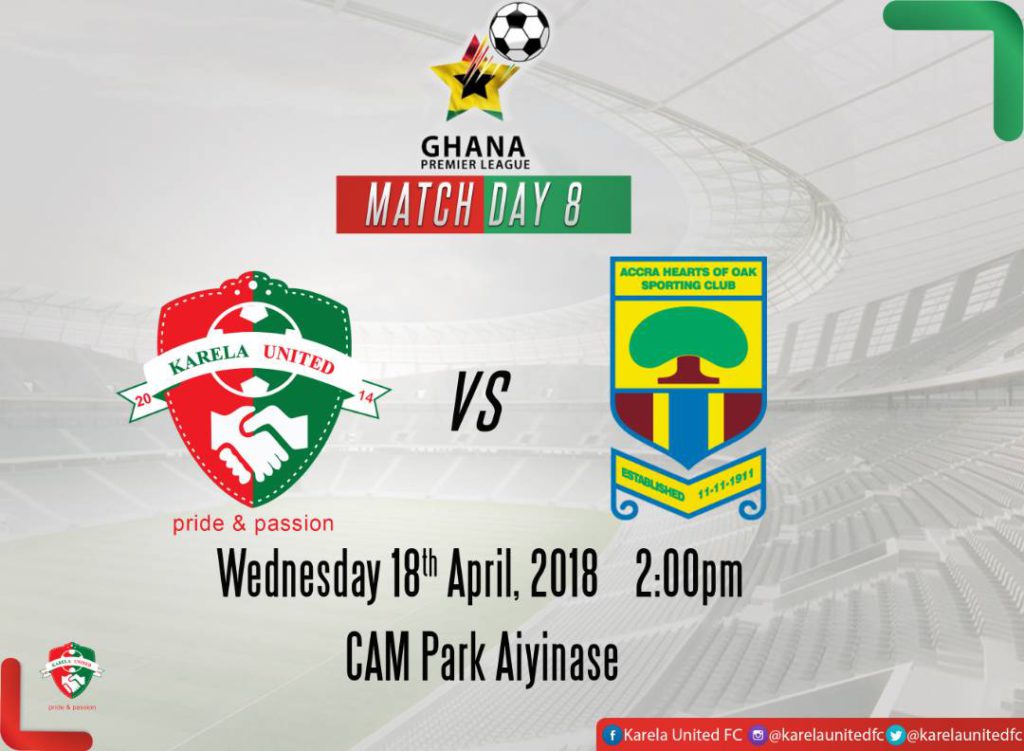 Hearts of Oak will be without their head coach Henry Wellington due to ill-health hence his deputy Edward Nii Odoom will be in the dugout for the game against Karela FC at Anyinase.

Karela United FC have lost only one of their last six matches in the league. They are undefeated in the last four.

Hearts of Oak have managed just three victories from their last seven matches in the premier league.

Karela United FC are unbeaten in their three home league games this season. They have not at home in any league fixture since 2016.

Hearts of Oak have recorded only two wins in their last seven away games in the premier league.

Karela United FC are hosting Hearts of Oak for the first ever time in the history of the premier league.

Hearts of Oak have not lost in any of their two matches against newly promoted sides in the league this term.

Karela United FC have not conceded a single goal in any of their last four fixtures in the premier league.

Hearts of Oak have managed to keep just one clean sheet from their last eight away fixtures in the premiership.

Karela FC vs Hearts of Oak

05- Hearts are back in the game but are failing to create chances.

06- Free kick for Karela FC after Jean Vitale was fouled in the centre circle.

07- Hearts have taken charge of the game now and are pressing their opponents from the left wing.

09- Evans Quao has been penalised by referee Amofa Sarkodie

10- Goooooooooooal - Daniel Kordie has given Hearts the lead. Karela 0-1 Hearts

13- Hearts of Oak have warmed into the game after taking the lead. The hosts are chasing shadows now.

Goooooooooal! Hafiz Konkokin has as opened the scoring for Bechem United against Wa All Stars.

16- Karela FC have rescued the game now as they push the Phobians into their half.

17- Yellow card is flashed to Ibrahim Moro for Karela after tripping Winful Cobbina.

21- Karela are threatening the goal area of Hearts now but the Phobians are leaving less spaces in their defense.

Bernard Don Bortey has been spotted in Anyinase fervently supporting his darling club..Hearts of Oak.

Goooooooooal! Wa All Stars have leveled the score line against Bechem..It's 1-1 now in Nana Gyeabour Park. The goal was scored by Jeoffrey Degorl.

In Kumasi..Kotoko are struggling to keep up with Chelsea pace.

Chelsea are pressing the hosts.. Latif and Arko Mensah are doing the damage to the Porcupine Warriors.

Offside...Chelsea have been caught offside by referee line 1 Haruna Bawa

Gooooooooal!Hafiz Konkoni has scored his second of the day- Bechem United 2-1 Wa All Stars

Gooooooal! Karela FC have done the unthinkable as they are leading by 2-1 courtesy William Opoku Mensah's brace.

Despite conceding the goal, Hearts of Oak are controlling the game and looks dangerous on the counter

Goals are aplenty in the league now as AshantiGold restores parity through Richard Dali Ella Djodi. It's 1-1 in Sogakofe.

Hearts are trying to rescue a point in the match but Karela are not giving them any breathing space.

Goooooooal! Abdul Nassiru has opened the scoring for Inter Allies against Eleven Wonders

Chelsea are being pressed into their half. It looks as if Kotoko will add to their tally anytime they attack.

The game has been put on temporary hold up as Arko Mensah is lying on the deck.

With all the other games in the other centre over, we are left with Kotoko and Chelsea

Corner for Kotoko..what can they do with this.....

Berekum Chelsea are getting more comfortable as the game wore on and it won't be a surprise should they pick a point from this match.

Scores at a glance