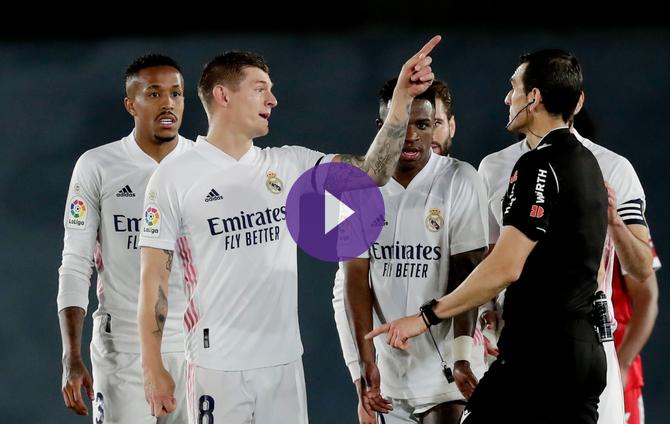 Real Madrid will require a helping hand if they are to defend their LaLiga crown despite Toni Kroos' late deflected strike rescuing a 2-2 draw at home to Sevilla, whose own hopes now appear over.

Ivan Rakitic had seemingly secured Sevilla a win that would have blown the title race wide open by scoring a late penalty, but deep into second-half stoppage time Kroos saw a hopeful shot hit Diego Carlos, who was unfortunate to see the ball end up in his own net.

Sevilla had taken the lead in the first half thanks to a lovely goal from Fernando, and they were good value for it against a Madrid side that still appeared to be labouring from their Champions League disappointment in midweek – their only moment of excitement coming via a disallowed Karim Benzema header.

They improved in the second period and levelled through Marco Asensio, that goal looking like the catalyst they needed to claim the win that would have put them top, but a switch that saw VAR overturn a Madrid spot-kick because of an incident in the opposing area left Zinedine Zidane's side in trouble.

Although able to cancel out Rakitic's successful kick, the result does Los Blancos little good as they are left two points adrift of leaders Atletico Madrid with just three games remaining.