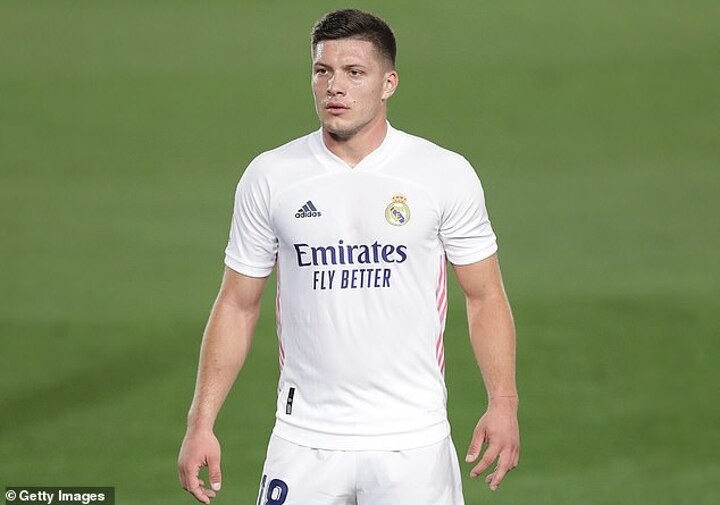 Real Madrid star Luka Jovic is reportedly facing a six-month prison sentence in Serbia after breaking coronavirus rules when he flew home to a party in Belgrade.

Real Madrid told their players to self isolate following the outbreak of the virus in March but Jovic broke quarantine in order to travel back to celebrate his girlfriend's birthday.

The striker was heavily criticised in his come country at the time and according to Serbian agency Tanjug, as reported by Marca, he is being prosecuted for breaking the rules and faces up to six months in prison.

Serbian newspapers also criticised the forward, explaining that he had celebrated his girlfriend's birthday on the streets of the capital city.

Blic wrote: 'Instead of self-isolating, he enjoyed himself all over Belgrade,' while Informer said: 'Luka did something very stupid. He left quarantine in Madrid, with the club and, despite all the warnings, returned to Serbia.'

The Serbian prosecutor's office claim that Jovic did not comply with the required health protocols upon his arrival in the country.

According to RTS, Jovic had to pay a fine of £27,000 which may help soften the punishment imposed.

Real said at the time the striker had special permission to fly home for medical reasons. All Real staff had been sent home after the club's basketball player Trey Thompkins tested positive.

Jovic was among a number of Serbs playing abroad who was criticised by the country's politicians for returning to the country during the height of the pandemic.

The Serbian prime minister Ana Brnabic said: 'We have the negative example of our football stars who earn millions and have ignored the obligation to self-isolate so they can return home.'

The Serbian government had called for nationals working abroad not to return from countries with a high infection rate. At the time, Spain had the fourth-highest death rate.

Jovic issued an apology but also defended himself in response to the comments, saying: 'On arrival back in Serbia they tested me and I was negative. It's a shame others were not professional in their work and did not give me concrete instructions on how I should behave during isolation.

'I ask forgiveness from everyone if in some way I have put anyone in danger. I hope together we can all get over this. Serbia has my complete support, we will beat this together.'

The striker has had a tough time at Real since joining in a £58million deal in 2019.

After scoring 17 goals in the Bundesliga with Eintracht Frankfurt in the 2018-19 campaign, Jovic managed just two goals in the whole of last season.

He failed to secure a move away in the summer despite Manchester United being linked with a loan deal.

Zidane recently insisted that the striker has a future at the Bernabeu after Real outcast Borja Mayoral, who is currently on loan at Roma, claimed the manager wanted to offload the 22-year-old in the summer.

'Lots of people can have their opinion, they are entitled to their opinion. We have to live with that. But Jovic is a Real Madrid player.'

The forward has made four appearances this season but has not managed to find the back of the net.