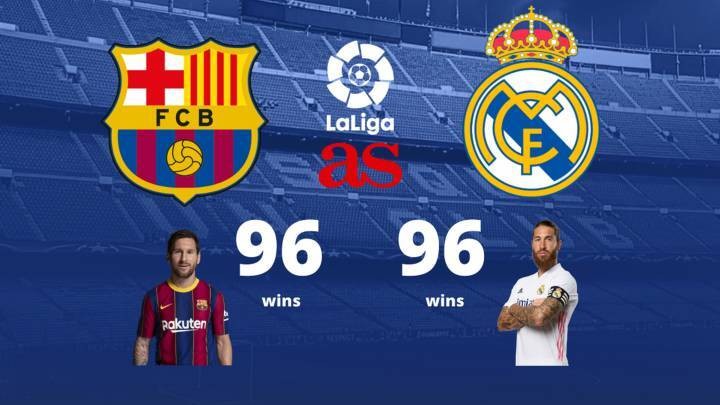 Over the last years, Barcelona has equaled and even surpassed Real Madrid in number of victories in Clásicos in all competitions, now they are even again.

The first El Clásico of the 2020/2021 La Liga between Barcelona and Real Madrid at Camp Nou is just around the corner. It’s going to be the 245th match the two Spanish giants will play against each other, with both teams fighting for the top spot of the domestic tournament.

In their last meeting Los Blancos beat the Catalan squad back in March in a season that ended up with Real Madrid winning the championship.

The Clásicos: the head to head

Besides their 244th Clásico, Barça and Madrid have met another 34 times in friendlies and other exhibition matches.

Their overall head-to-head record has been extremely tight. Real's win in their last meeting brings them back level with Barça on 96 wins each overall.

The Guardiola era, a ‘Real’ boost for Barça

Madrid had a notable advantage over Barcelona at the beginning of the 2000s, but the arrival of Pep Guardiola to the Barcelona bench turned the situation around.

In La Liga, Barça have won 13 of the Clasicos played since Guardiola's appointment, drawing four and losing four. They also won the 2010-11 Champions League semi-final, (0-2 at Santiago Bernabéu, 1-1 at Camp Nou).

Barcelona, Real Madrid... and the trophies

The debate over which is the most decorated club in Spanish football continues and will probably remain in the conversation for a long time.

Real Madrid have a total of 119 trophy wins over their history in all competitions (includes regional, national, continental and global), while Barcelona have gathered 129 titles.

Los Merengues dominate in main competitions, with 34 Spanish leagues and 11 European Cups; Barcelona have a higher number of total trophies.