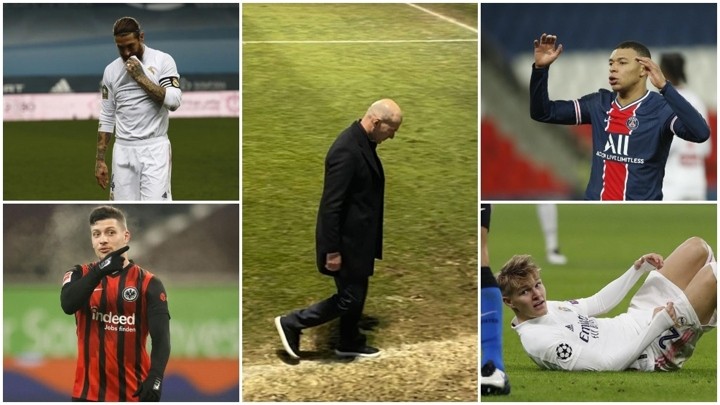 The humbling elimination at the hands of Alcoyano in the Copa del Rey has dropped Real Madrid into a fresh crisis - one which extends beyond the first team and into every corridor at the club.

From the boardroom to the dugout, Los Blancos' problems can be found in several departments, while there are a number of individual situations that are raising alarm bells as well.

We've taken this opportunity to analyse what exactly is going wrong at the Estadio Santiago Bernabeu and why the club are struggling so much on and off the pitch.

After coming under pressure during the first part of the season, Zinedine Zidane saved himself with a run of good results in December. However, all that good work has now come undone by a slump in form that is born out of the team's inconsistency.

In 26 matches this season in all competitions, Real Madrid have picked up just 14 wins. They've lost seven times and drawn the other five. In just the last week, they've been dumped out of the Supercopa de Espana and the Copa del Rey.

While these two competitions are not the priority, there haven't been great signs in LaLiga Santander or the Champions League. They only progressed to the last 16 of the latter thanks to a win over Borussia Monchengladbach in the final group fixture.

One matter that could well be distracting both the directors and players, not to mention the coaches, is that of Sergio Ramos' new contract.

With five months to go until his current deal expires and no agreement with the club over an extension, Real Madrid may be without their captain sooner than most anticipated.

The defeat to Alcoyano in the defender's absence underlined his importance once again to the current squad, who are all in support of his contract situation.

Martin Odegaard's request to leave the club couldn't have come at a worse time. His previous loan deal was cut short in the summer but, after a lack of match action in the first half of the season, he's now itching for a move away once more.

The Norwegian's open desire to leave is a blow to Zidane's image, with the Frenchman already criticised for the lack of confidence he shows in young players.

As MARCA have reported, Odegaard is very close to joining Arsenal. If that move goes through, it's certainly not going to help Zidane's popularity amongst the supporters.

The feeling around Luka Jovic at the Bernabeu changed in the space of 28 minutes last weekend as he scored twice in under half an hour on the pitch for Eintracht Frankfurt.

"You just had to play him," teased Frankfurt's Spanish Twitter account after the game, referring to the striker's lack of minutes back in Madrid.

Like every other club, Real Madrid have been trying to manage the impact of the coronavirus crisis since the start of the pandemic.

However, with the Bernabeu still in construction and still closed to the public, revenues are low and there's barely any money to spend on transfers.

David Alaba has been tied down for next season but the chances of signing a marquee player like Kylian Mbappe and Erling Haaland next summer are slim.