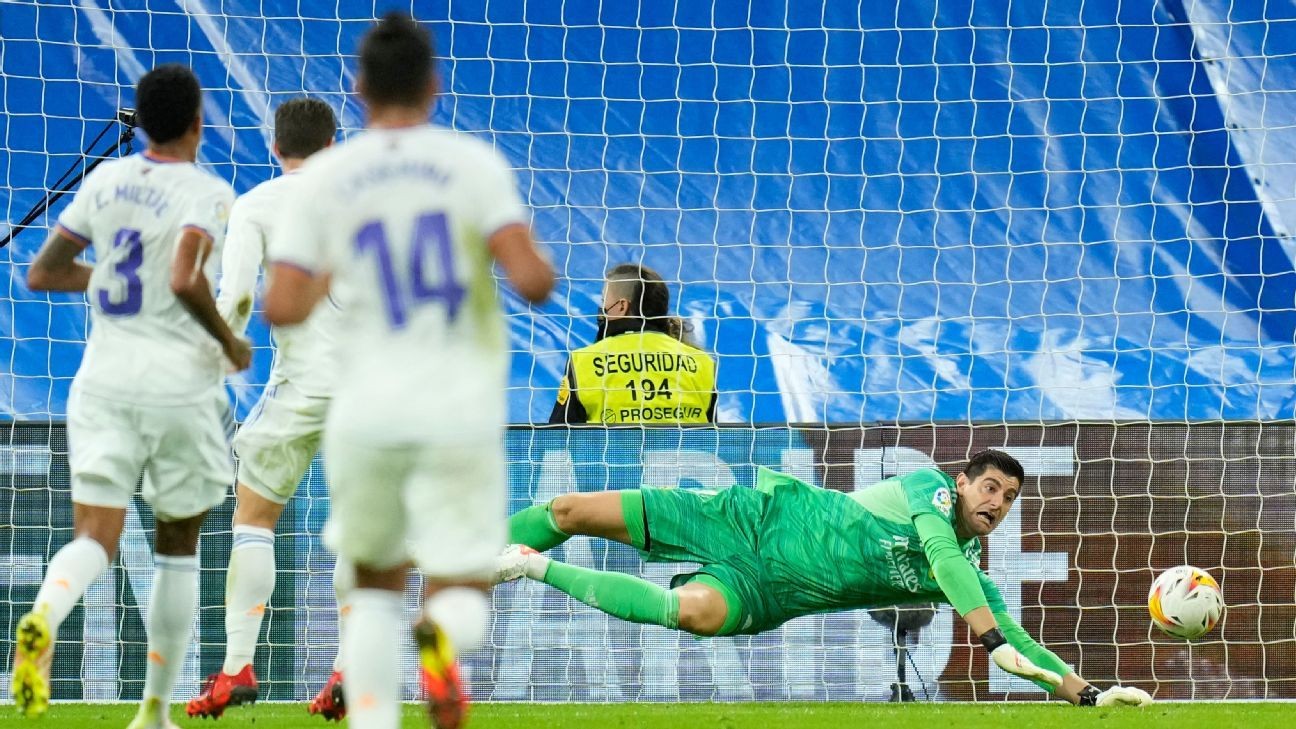 Thibaut Courtois has criticised the referee's failure to award Real Madrid a penalty in their 0-0 draw with Villarreal, suggesting controversy over the official's performance a week earlier contributed to the decision.

Ref Jesus Gil Manzano waved play on when defender Nacho appeared to be fouled by Raul Albiol inside the box in the first half of Sunday's stalemate at the Bernabeu.

A week earlier, Gil Manzano had faced criticism for his refereeing of Atletico Madrid's 0-0 draw with Athletic Bilbao and his sending off of Joao Felix for dissent.

"Everyone says it was a foul," Courtois said when asked about Nacho's penalty appeal. "I don't know if that was earlier in the move, or for the penalty. We know where he refereed last week. There was a lot of noise. Today he wanted to let things go."

Courtois -- who was one of Madrid's standout players, making three important saves against a Villarreal team who dominated the first half -- described the feeling as "bitter" given that title rivals Atletico had been beaten by Alaves earlier on Saturday.

"You want to win at home, and when a direct rival loses you want to get three points," he said. "Villarreal are a good team, a Champions League team, they're good on the ball... In the second half we improved but we couldn't impose our intensity. The point doesn't feel like much, we didn't create clear chances and they had better ones."

The result leaves Madrid top of the LaLiga table on 17 points, three ahead of second-placed Sevilla, who have a game in hand.

Coach Carlo Ancelotti refused to be drawn on the penalty incident. "Honestly I didn't see it, so I can't say anything," he said in his post-match news conference. "I haven't seen a replay. I think there was a foul outside the box, but inside the box I didn't see the contact."

Ancelotti denied that Courtois' prominence in the display was a reason for concern.

"If we have a keeper like Courtois we're lucky," he said. "He did well, above all in the first half. They were dangerous on the counter and Courtois is there. A clean sheet is positive. But we'll keep going, I'm not sad, it can happen against Villarreal. It wasn't our best night but that's OK."