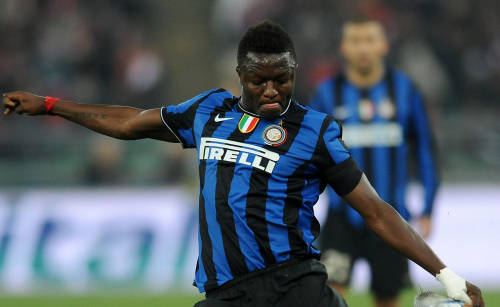 According to a report in Spanish newspaper Noticias are willing to pay three million Euros to sign the player for Inter Milan. According to the report, Sociedad have now made a formal for the Ghana enforcer.

The report added they are willing to meet the salary demands for Muntari to move to Spain but it unknown whether the midfielder is keen on the move.

This comes just two weeks after he rejected a proposed bumper move to Turkey to play for giants Galatasaray.

The Turkish giants slapped in a huge offer for the Ghanaian midfielder as they are ready to pay the $10m Inter Milan are asking for the left-winger.

Galatasaray also made a hard-to-resist salary offer to Muntari by doubling the wage he receives at the Italian which means the Turks are ready to pay him two million Euros per year.

The 26-year-old who is believed to be surplus to requirements at dethroned Italian champions Inter Milan after completing a six-month loan spell at English side Sunderland.