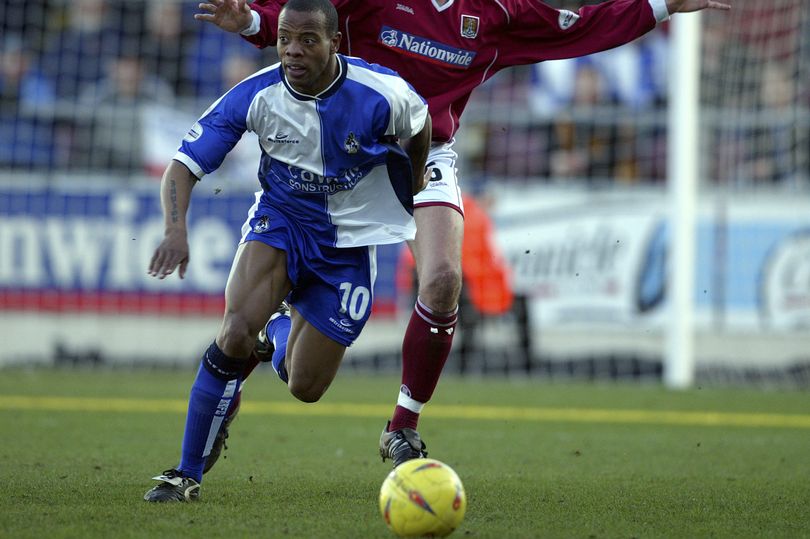 Junior Agogo had many a memorable moment in a Bristol Rovers shirt - but few games will compare to the stunning 2-2 comeback against Yeovil Town back on October 19, 2004.

Gasheads were hit with the sad news today the former Rovers striker has reportedly passed away, aged just 40.

The Ghanaian striker played 140 games in all competitions for the Gas between 2003 and 2006, scoring 45 goals.

According to a number of reports in Ghana, he passed away in London on Thursday morning.

Agogo suffered a stroke back in 2015 which left him debilitated just two years after retiring from playing.

Agogo's home in London was reportedly a shrine to his glorious playing career and few games were more special than that Autumn one at the Memorial Stadium.

Playing in League Two, the Gas found themselves 2-0 down and with just nine men, with less than half an hour to play against their local rivals.

Paul Terry had given the Glovers the lead in the first half before Gavin Williams doubled the margin in the 57th minute.

In between the goals the Pirates had lost two men to red cards in the feisty encounter. First Dave Savage was dismissed by referee Phil Crossley for punching Williams which set-off a mass brawl involving virtually everyone on the pitch, plus the dugouts.

Then Steve Elliott was given his marching orders for an elbow on Yeovil's Phil Jevons which saw another brawl break out.

Agogo was playing as a lone frontman that match and played a key role in both the home side's goals.

In the 64th minute he got behind left-back Michael Rose to cross the ball for James Hunt to convert and then with four minutes remaining Agogo netted from inside the box to send the Mem wild.

It was a game to last long in the memory and to be talked about in hushed tones for years to come.

After the match the then Yeovil Town manager Gary Johnson said: "The players thought all they had to do was knock the ball about, but Bristol Rovers have a lad up front (Agogo) who can be dangerous and he proved that."