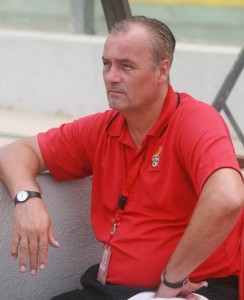 Asante Kotoko have denied that they have parted ways with Serbian coach Bogdan Korak, GHANAsoccernet.com can report exclusively.

The media has reported that Maxwell Konadu has taken over the the club following the decision to part ways with the Serbian.

But Kotoko have denied that a decision has been taken, insisting talks about the future of the coach is still ongoing.

"We have not sacked Korak but I can confirm that the board is working on arriving at an amicable parting of ways with him," Kotoko public affairs manager Ben Nti said in a statement on GHANAsoccernet.com.

"Such an appointment will be confirmed when the board reaches an agreement with Korak and amicably part ways with him."

Serb who took over from Ebo Mends last February has been under intense pressure especially after their President's and FA Cup defeats to Berekum Chelsea and Nania FC respectively.

He however supervised Kotoko's training tour in his native Serbia but did not return with the team to Ghana where officials told the media the 51-year-old has been granted a 10-day leave.

An unnamed foreign coach is expected to take over the technical directorate of the Kumasi-based club while Maxwell Konadu will succeed Korak as head coach.

Newly appointed Yusif Abubakar will take over the assistant role and is expected to start work on Monday.

However, current technical director, Malik Jabir will be on the bench of Kotoko for their weekend friendly with Nigeria club Warri Wolves.

Attempts to reach officials of Kotoko for confirmation or denial of the story proved futile.