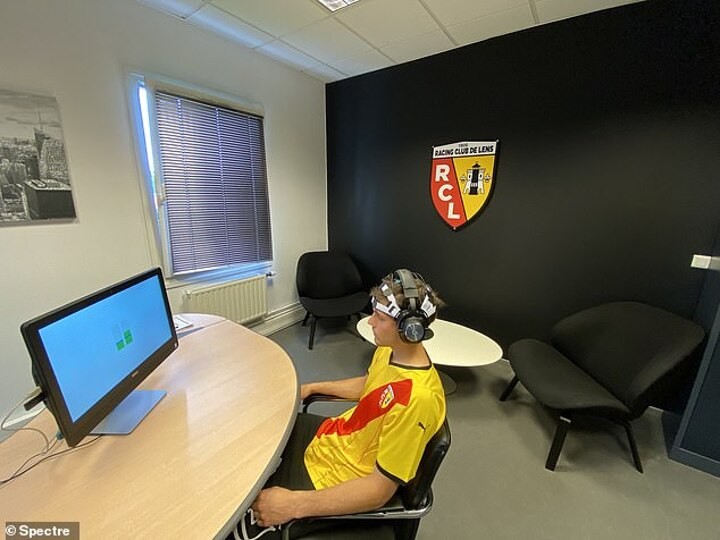 The makers of a new headset which can diagnose concussion in a matter of minutes are looking to bring their revolutionary technology to English football.

It was announced on Wednesday that Premier League and EFL players would be restricted to 10 'higher-force' headers a week amid concerns over lasting effects on the brain.

Research behind the decision included studies at Liverpool and Manchester City using a trauma-detecting gumshield – a piece of technology originally brought to light by Sportsmail.

And now a further innovation could be set to map the future of brain damage prevention in the top flight and beyond.

A number of clubs from France's top two divisions, including Ligue 1 outfit RC Lens, are currently testing out the device produced by French performance company Spectre which, among several other features, allows doctors to identify any brain injury within four minutes of a player leaving the field.

A headset with 18 sensors placed on the head at the side of the pitch needs just three minutes to perform a scan of the individual's brain function.

Once complete, the scan is compared to the player's normal signature and any discrepancies can be flagged up to doctors within 60 seconds.

Tackling concussion issues has been high on the agenda for the Premier League, with concussion substitutes introduced on a trial basis in February – a world first in football.

High profile incidents at this summer's Euros also highlighted the need for more stringent measures, with France's Benjamin Pavard and Austria's Christoph Baumgartner allowed to return to action despite evidence neither were fit to continue.

Teams across the channel are already using the programme, which can also be used to detect other areas of concern for sport stars including anxiety, burnout, sleep deprivation and depression.

And now Spectre are looking to introduce their technology to the UK and the Premier League.

Antony Branco Lopes, Spectre's co-founder, told Sportsmail: 'We all have an electrical signature, which is identical from the two hemispheres [of the brain]. This is one of the easiest things to measure.

'As soon as something happens on the field, we measure this signature, and then we compare it. When you have a brain injury or trauma it's localised. You have two parts – where you're hit, and behind it, because the brain moves back and forth.

'We will find, very easily, asymmetries. If it's happening, you don't go back on the field. If it's not, you can go back on.'

Prevention is one of four areas the Spectre technology covers, which is also being trialled by Formula One and is used by the French Federation of Motorsports (FFSA).

It is also able to provide health scans, measure brain function and cerebral training. Its work on training the attention network of the brain is the company's core innovation and can improve attentiveness of users by up to 30 per cent.

The ability to provide assessments of brain health has also provided some much-needed insight for some clubs, with one Ligue 2 club using the headset to help them understand the needs of one of their players.

'The story was: 'We are interested in measuring this player, because we bought him and he's not doing well on the pitch. We suspect sleep problems, but we don't know what, and it's hard to communicate with him',' Branco Lopes explains.

'So they could talk to him and say: 'Look, we see that you have a lack of sleep, we can see you are entering a burnout state so let's talk'.

'They could be objective on it, confirm their doubts, and have more information. And if they could measure it before buying the player, maybe they wouldn't.'

English football chiefs are in talks to expand their studies beyond heading, with impacts from tackles and collisions next on the agenda. Further research will take place before a review in June.

The PROTECHT mouthguard measured the impact of nearly 1,000 headers among youth and women's teams at Liverpool and Manchester City last season.

Now the company's CEO Chris Turner has said: 'We're talking to the Premier League and FA about building out into something broader. We're very hopeful that will happen with a broad church of clubs — male and female. That's important.'