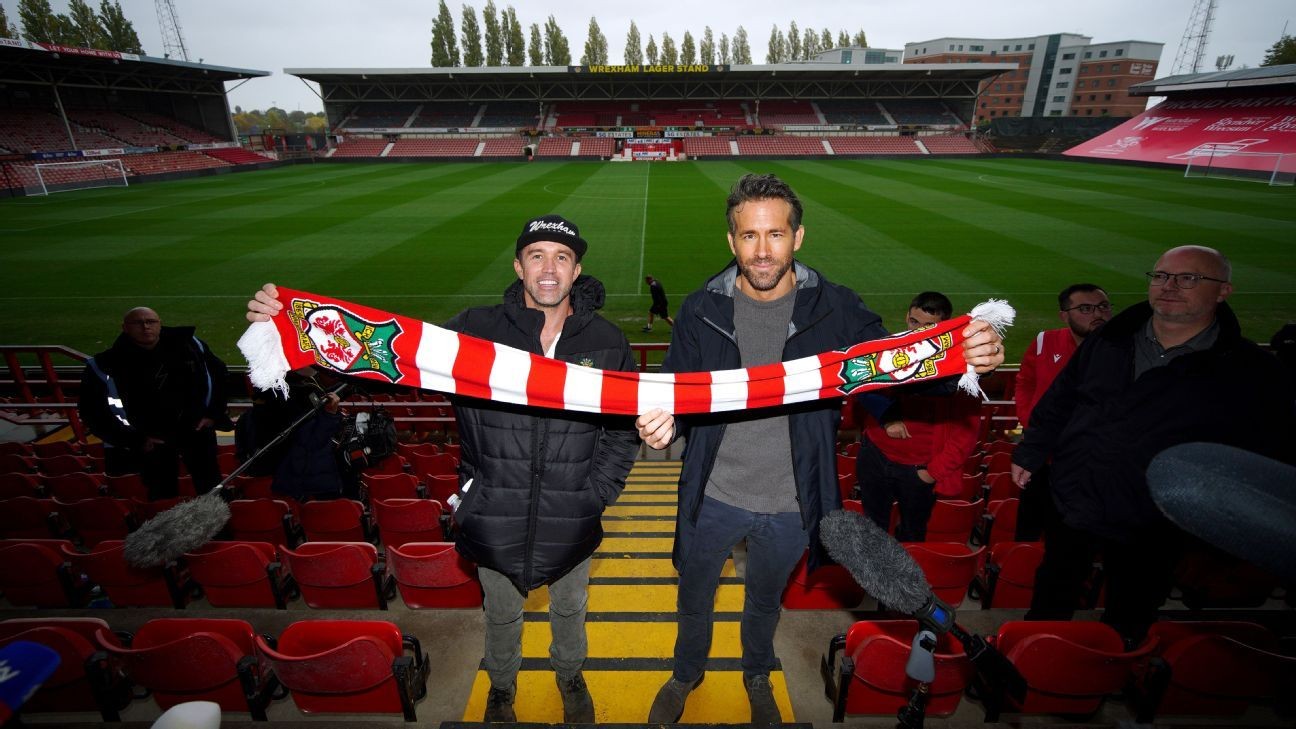 WREXHAM, Wales -- Nearly nine months after finalizing a takeover of Wrexham A.F.C., a team based in north Wales that plays in the fifth tier of English football, screen stars Ryan Reynolds and Rob McElhenney made their first appearance on Thursday at their home pitch to watch the team practice and to address a throng of media from across Britain.

"The thing that I loved most about it was just having the time to hang out with the players and sort of break down that weird wall, because it's been well over a year of us watching from afar," Reynolds said. "I'm sure a lot of the guys on the pitch have been 'Who are these guys? What is this? And how is this going to work?' So it was just nice to have those little moments in between the pomp and circumstance."

English football has seen a steady stream of foreign investors in recent years, with billionaires and celebrities acquiring both high-profile clubs, as well as teams under financial pressure. Reynolds and McElhenney emphasized that as much as they're drawn to the romance of rehabilitating a club that's struggled outside of the English Football League since its relegation in 2008, their primary goal is to win.

McElhenney recounted asking an advisor if it was feasible for Wrexham to one day compete in the Premier League. He was then told that, while theoretically possible, the prospect of Wrexham ever playing in the top division of English football was unlikely -- a claim that made him incredulous.

"I don't understand why, if that you can theoretically get there -- we clearly have the structure and the system potentially to allow for us to grow at scale -- why not dream big?" McElhenney said.

Though the transaction was completed last winter, travel restrictions due to COVID prevented the pair from visiting their new asset. On Tuesday, they attended their first Wrexham match, a loss at Maidenhead United, where the two entertainers were heckled by the home supporters.

"Normally I'm only heckled in my home," Reynolds said. "So this was sort of new for me and sort of weirdly thrilling."

Intrigued by the prospect of turning around Britain's third-oldest soccer club with a storied history in an economically distressed town, Reynolds and McElhenney invested approximately $2.75 million after marshalling the support of the Wrexham Supporters Trust Board, the fan organization that governed the club.

"We love the idea of telling the story of a working class town and a working class club," McElhenney said, noting the parallels he sees between Wrexham and his native South Philadelphia. McElhenney and Reynolds are being accompanied on the trip by a documentary crew for an upcoming documentary on the club and community to be released in 2022.

"Sports is storytelling," Reynolds said. "When you take a deeper dive in Wrexham, you see just how inextricably linked the club is with the community around it. There's such a storied past here and there's so much room to grow again.

"There's a Cinderella aspect to it. There's an underdog story there that is powerful and potent."