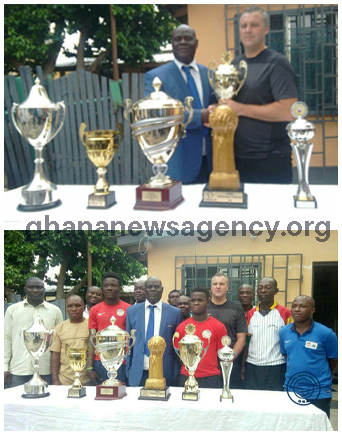 Right to Dream present their trophies to the ERFA

The five member delegation, which was made up of the Technical Director, a Scout, Administrator and two players from the Under-17 Academy, presented six trophies to the ERFA.

The six trophies are the Under- 15 boys won in Holland, Under- 17 boys and Under -18 girls trophies won in Sweden, Under -15 boys trophy won in Denmark and the boys Under- 17 cup won in Northern Ireland.

The Technical Director of Right to Dream Football Academy, Mr Gareth Henderby urged the ERFA to sustain the close collaboration between the two parties.

He said this year, the team had been successful, winning trophies in their European tours and thanked the football association for their enormous support.

Mr Henderby said the core motive of the academy is to produce world class footballers.

The Eastern Regional Football Association Chairman, Mr Abdul Lawal congratulated the team for their achievement and the honour they have brought to the region and the nation as a whole.

He commended the Academy for providing five players to the National Under-17 team to participate in the upcoming world tournament in India, slated for October.

He assured the Academy of the RFA’s continuous support and expressed the hope that the academy would continue to groom more soccer talents for the country.