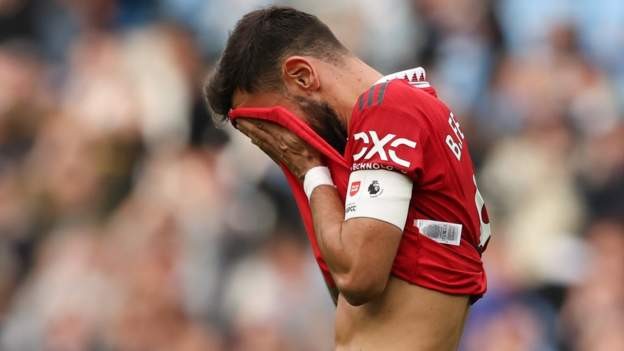 Manchester United still look some way off a title challenge

Manchester United arrived at Manchester City accompanied by hope resulting from four Premier League wins. It gave them optimism above their current station.

It was hope and optimism that lasted roughly two minutes, as Pep Guardiola's reigning champions began a relentless siege that put United firmly in their place and ended in the reality check of a 6-3 thrashing that flattered Erik ten Hag's side outrageously.

United visibly subsided from the moment when, in the space of one attack, Scott McTominay hooked Erling Haaland's header off the line, David de Gea somehow kept out Kevin de Bruyne's shot, then the Scotland midfielder appeared on the scene again to keep out Bernardo Silva's goalbound effort.

Ominous barely covered it as City, effectively playing without a defensive midfielder in Rodri's absence, completely dominated the game, fuelled by the genius De Bruyne's creation and the finishing of Phil Foden and Haaland.

United's recent results, especially the win over Liverpool at Old Trafford, have lifted the mood but the way they were overpowered and dismissed by Manchester City is a more accurate measure of where they stand... namely some distance from a title challenge.

This will come as no surprise to Ten Hag, who knew the scale of his task after those opening two Premier League defeats to Brighton and at Brentford, but what will be painful was the scale of United's deficit in quality compared to City.

City and United are neighbours, but rivals? Forget it. This was a humiliation.

The home fans shouted "We want 10" and sarcastically chanted "Ole" on the rare occasions United strung more than three or four passes together, the inevitable concession of possession back to City greeted with huge roars of delight.

This was torture for United, with the vast majority of their fans heading for the exit long before the finish.

As at Brentford, United were 4-0 down by half-time but it is no exaggeration to suggest City could have had double that tally inside the first 45 minutes.

Loyalty is a fine quality but one must question whether Ten Hag stretched it beyond its limit by keeping faith with McTominay, Christian Eriksen and Bruno Fernandes in midfield.

Casemiro, well versed in these elite games, was kept on the bench. This was surely the sort of contest Manchester United had in mind when they paid £70m to take this midfielder of vast experience and great success from Real Madrid?

Casemiro was introduced with the game settled as a contest

Even after somehow scraping through that opening salvo, United could only last seven minutes before Foden opened the scoring. The fight drained out of United, defensively they were a mess and this ruthless City side was not going to pass up this opportunity to embarrass them.

United looked fearful, like a team who never truly believed they had a chance. Perhaps they were correct.

No City player had scored a Manchester derby hat-trick since Francis Lee in 1970. Now, there were two at once as the remarkable Haaland and Foden claimed trebles, the Norway striker becoming the first player in Premier League history to score three successive hat-tricks at home.

United were all over the place defensively, Haaland scoring the second by rising above the unlikely combination of Eriksen and McTominay at a corner as Raphael Varane recovered from an injury that eventually forced him off.

And no-one can even suggest the fact they scored three goals to City's two in the second-half can be labelled as the time-honoured 'consolation'. There was no consolation in this.

New-boy Antony's superb strike was a minor shaft of light in United's gloom, which was not lifted by Anthony Martial's late header and penalty that gave the scoreline an almost respectable appearance given the way United had been utterly outclassed.

Indeed Antony's goal only acted as provocation, City responding with two quick goals to make it 6-1. Martial's double came with the game over, City slackening off as Guardiola had made a host of changes.

There were the inevitable cutaway shots of the unused Cristiano Ronaldo on the bench. He looked suitably hacked off, but was perhaps best out of this. There was almost sympathy for Luke Shaw when he was sent on for Tyrell Malacia at the start of the second half.

This crystallised United's target this season. It has to be the top four, because they cannot even be mentioned in the same sentence as City. The lack of desire in this game's lowest points, and there were plenty, was a haunting throwback to the suffering under Ole Gunnar Solskjaer and Ralf Rangnick.

Look at this scoreline down the line and 6-3 may not seem too bad. It might give the vague impression of a contest, of a 'nine-goal thriller'.

Not a bit of it. This was a thrashing, the scoreline made lop-sided by those two late goals, which misrepresented just how far Manchester City are ahead of Manchester United.

Ten Hag will not have been fooled by Manchester United's recent renaissance of sorts, but this must have been the coldest of showers for anyone at Old Trafford thinking they might be moving closer to those they hope to eventually challenge.

Can people smugglers be stopped?: Panorama investigates if the government's Rwanda plan will deter migrants trying to come to the UKStorm clouds are gathering for Berlin's elite...: Coming-of-age drama set in Germany in the 1920s