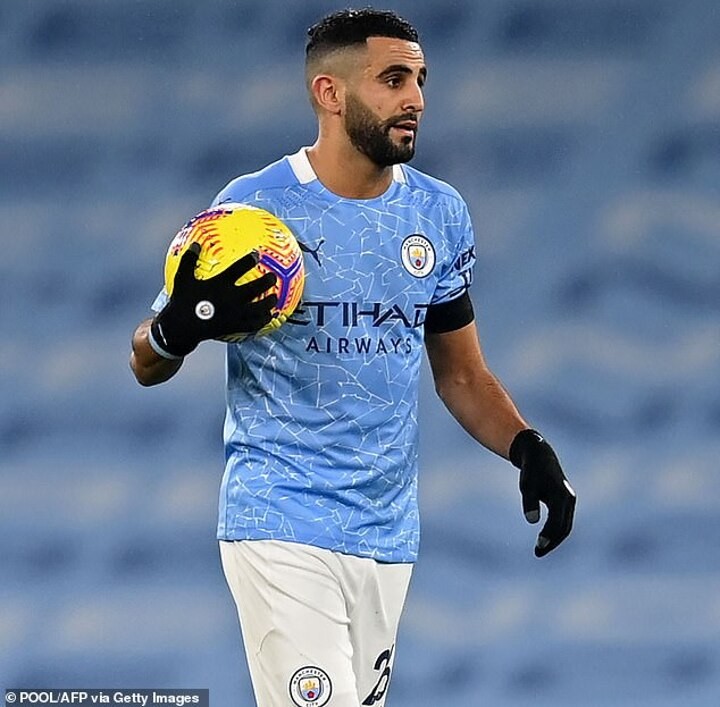 Riyad Mahrez says he was confident the goals would come for Manchester City after his hat-trick helped the club humble Burnley yet again.

Mahrez claimed his first treble in five years as City thrashed the Clarets 5-0 in their Premier League clash at the Etihad Stadium on Saturday.

It was the fourth consecutive time Burnley had lost away to City by that scoreline and was just the tonic the hosts needed after a patchy start to the season.

In their eight previous Premier League games, of which they had won just three, City had only found the net 10 times - a marked comedown from their usual high attacking standards.

'We knew it was going to come,' said Mahrez. 'It has been frustrating sometimes. Every game we created chances but weren't scoring.

'We worked a lot in training to be more in the box and arrive more. I think we are improving but we need to keep working in training to repeat this.'

Mahrez set City on their way to their convincing victory after just six minutes and added a second on 22 minutes.

Benjamin Mendy volleyed in his first for the club before half-time and Ferran Torres struck before Mahrez completed his hat-trick with a header on 69 minutes.

It was Mahrez's first hat-trick since he helped Leicester sink Swansea in December 2015 and marked a return to form after a frustrating start to the season.

'The last week, or few days, he has been much better,' stated manager Pep Guardiola. 'We saw him sharper. Before he was not.'

Mahrez added: 'Maybe I could have scored more but sometimes it is like this.

'It is always good to score goals and when you score a hat-trick it is another sensation of that feeling, but the most important thing was to win, to create chances and try to score.'

The result lifted City back into the top half of the table and left Burnley in the bottom three, a hefty blow for Sean Dyche's side after Monday's first victory of the season over Crystal Palace.

Dyche said: 'Every year for me and the club are a restart. There are no guarantees in the Premier League but every year to you want to build and enhance your chances.

'I didn't think for one minute our form over the last nine games was going to continue, not because I thought they weren't capable but because when you get that many injuries it is bound to affect you.

'It has been a difficult battle every year. There is no easy ride in the Premier League. I know the challenge. There is a balance in knowing what the team can do. This one got away from us. That can happen.'