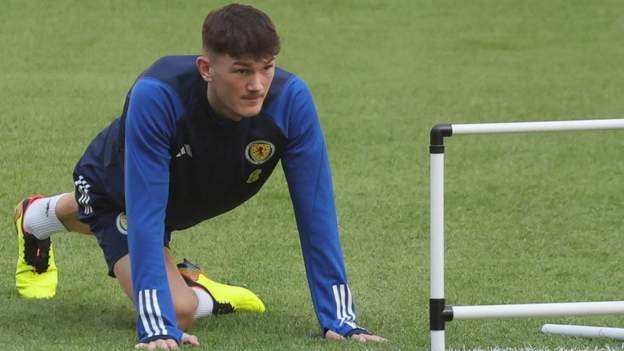 Andy Robertson says Liverpool team-mate Calvin Ramsay has "a massive future ahead of him" and the potential to become a Scotland stalwart.

Right-back Ramsay is poised to make his debut against Turkey on Wednesday - a week after the 19-year-old's first start for the Premier League club.

"Obviously Liverpool spotted that and that's why they bought him," he said of the player sold by Aberdeen in June.

"He doesn't seem fazed by a lot of things and takes everything in his stride - that's credit to him. Everyone at Liverpool is excited to see how far he can go and I'm sure everyone in Scotland is the same."

Scotland relish 'important test' in TurkeyWhat happens when a player is called up?Pick your Scotland XI to face Turkey

Ramsay's progress at Liverpool since his £4.2m switch was hampered initially by injury, but he made his first-team debut as a late substitute in the 2-0 Champions League win over Napoli earlier this month before starting their EFL Cup win over Derby County.

He will have to compete with Everton's Nathan Patterson, Brentford's Aaron Hickey and Celtic's Anthony Ralston for Scotland caps - and their absence from the current squad has handed him his opportunity in Diyarbakir.

"He's coming up against the world's best right-back in Trent, but since he's been back in training, he's been training really well and obviously got his reward with his debut," Robertson said. "He'll be looking for more game time - that's how you learn and develop.

"I know he's excited being involved in the Scotland camp and I'm sure he'll be involved in a lot more for many years to come."

Josh Doig has impressed with Hellas Verona, after the 20-year-old's summer move from Hibernian, to increase the competition for Robertson's own left-back role, while former Aberdeen midfielder Lewis Ferguson has shone with Serie A rivals Bologna, where Hickey made his name after leaving Hearts.

"When you go abroad, or work with foreign managers, you see a different way of football," Robertson said.

"When you deal with different countries, different cultures, it can develop them so much. It's good for us that lads do well in different leagues.

"All these players are trying different things and it can only be a good thing for Scottish football as a whole."

Obsessed with... SAS Rogue Heroes: Dive into the action behind the scenes of the epic dramaTheir dream home turned into a nightmare: A brand-new paranormal cold-case investigation