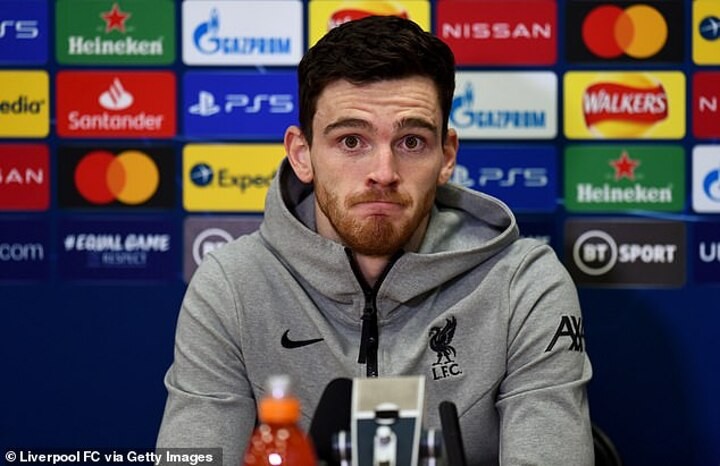 Liverpool defender Andy Robertson has become the third player from the Premier League champions to publicly question whether the use of VAR technology should continue in the game.

Captain Jordan Henderson and midfielder James Milner came out with broad-ranging criticisms of the video review system after Saturday's 1-1 draw at Brighton & Hove Albion. Milner said he was 'falling out of love with the game in its current state'.

'I think (Milner) was echoing what a lot of footballers and fans are feeling,' said Scotland full back Robertson, ahead of Tuesday's Champions league match with Ajax Amsterdam at Anfield.

'A lot of people that I've spoken to, aren't enjoying watching football as much as they once did. It is constantly in review, on a screen.

'I agree with Milly. I think a lot of footballers and fans would agree also. Football is a great game, which we fell in love with. It's important we don't lose that fact. It's important to remember the key values of football,' he added.

Robertson said that VAR had failed to deliver the consistency in decision-making that was vaunted as being the main benefit of the technology.

'There are a lot of improvements to be made. We are 18 months down the line, and still the same mistakes are being made,' he added, before focusing on the penalty awarded against him at Brighton.

'On Saturday, I've got no problem with my tackle being deemed a penalty. But I was watching the games yesterday and saw two very similar instances that went unpunished (on Manchester United's Marcus Rashford and Wolverhampton Wanderers' Adama Traore).

'I think that's where we are struggling a wee bit. We are just looking for consistency. We thought we would be getting that with VAR but maybe we aren't getting that just now,' he added.

Robertson said watching matches on television, he found the broadcasts were being dominated by VAR decisions.

'Too many games are passing by, with people in the studios still discussing referee's decisions, what could or couldn't have been.

'If that is still going to be a thing, then I would much rather leave it up to the referee's naked eye. It is much easier to accept mistakes then, rather than when so much technology is around it.

'It's affecting the players, but more the whole game. Even when fans are back in - they celebrate goals. I used to love going to football games and being in that moment.

'That's just taken out of the game a wee bit. You're waiting sometimes two or three minutes to see if the goal is onside or offside,' he said.

Henderson had said he would like to see VAR scrapped and a return to what he called 'normal football'.