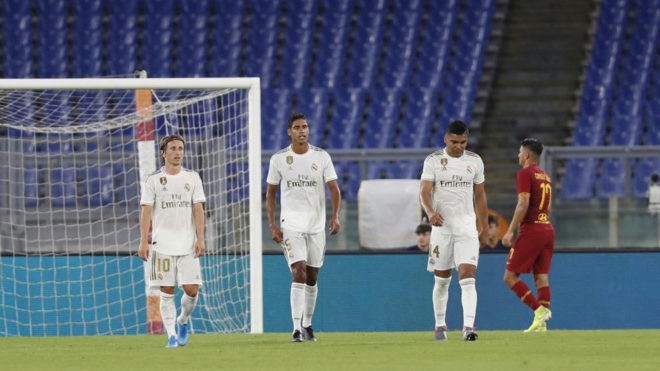 Real Madrid have had a turbulent pre-season to say the least and that continued against Roma, with the Giallorossi reopening Los Blancos’ defensive wounds at ease in the first half of their clash at the Stadio Olimpico. The game went to penalties as the scores were level after 90 minutes, and it was Marcelo who missed the decisive spot kick to give Roma the Mabel Green Cup.

Zinedine Zidane decided to go with the three-man defence system that he deployed against Red Bull Salzburg, yet Madrid went into the half-time break having conceded two goals already, taking their total number of goals conceded this pre-season to 18 in seven matches.

Nacho Fernandez’s decision to step up and try and win the ball back further upfield backfired for Roma’s opener. Casemiro was left in a one-on-one battle with Nicolo Zaniolo on the right wing, which the Italian won comfortably, and Zaniolo then went on to set up Diego Perotti to level the scores at 1-1. Paulo Fonseca’s side scored their second immediately after conceding their second goal of the night, which is evidence that Madrid’s defence were clearly not concentrating as Edin Dzeko was allowed to ghost between Eder Militao and Raphael Varane before hitting a first-time shot past Thibaut Courtois.

The worrying part for Madrid is that LaLiga Santander gets underway next weekend, yet they look as though they could do with another couple of weeks to get ready. Their play is not fast enough, they are too reliant on individual moments to score goals, and they are reminiscent of the side that ended the 2018/19 campaign with their tail between their legs. Perhaps they could take their game up a level when they face Celta Vigo at Balaidos next Sunday, but from this evidence and most of what we have seen throughout pre-season, that is highly unlikely.

The 1-0 win against Red Bull Salzburg seemed to alleviate a lot of the doubts that surrounded Madrid, but it is worth remembering that they are by no means one of the behemoths of European football. Only winning against an underwhelming Fenerbahce side and Salzburg should cause plenty of people to worry, especially given Los Blancos’ defeats to teams with quality such as Atletico Madrid, Bayern Munich and Tottenham Hotspur.

In terms of the game itself, Roma were arguably the better of the two sides in the first half but that didn’t prevent Madrid from taking the lead in the 16th minute. Luka Modric picked out Marcelo on the left, who came in and fired a right-footed shot into the right corner of Pau Lopez’s goal.

If anything, the strike seemed to bring some calmness to Los Blancos’ play, but they were soon carved open in the 34th minute. As noted above, Nacho tried winning the ball higher up the pitch as he went forward to try and close down the pass to Cengiz Under, however once the Turk flicked a pass on for Zaniolo, it was then a one-on-one battle between him and Casemiro down the right flank. The Brazilian midfielder knew that he didn’t have the speed to keep up with Zaniolo and hence tried to scythe him down, yet the 20-year-old got away and picked out Diego Perotti in the box, who fired a first-time left-footed shot above the diving Courtois.

Five minutes later, Madrid regained the lead. Casemiro had been found out somewhat for Roma’s first goal but he managed to get on the scoresheet himself, although he looked as though he could have been offside. Eden Hazard played a short corner and the ball made its way to Marcelo, who played a lofted cross from the left towards the right side of the six-yard box and Casemiro was able to outjump Aleksandar Kolarov and head past Pau to make it 2-1.

No more than 90 seconds later, it was 2-2. Fede Valverde tried reading what Under was going to do but the winger played an unbelievable pass towards Edin Dzeko, which cut out four Madrid players. The Bosnian was on the same wavelength as his young teammate and was able to hit a first-time shot past Courtois, whilst being under pressure from Militao.

The second half saw far less action, but what was noticeable was that Gareth Bale made his entrance on the hour mark. The Welshman had a couple of chances to get on the scoresheet, including one shot in stoppage time which looked as though it was going to caress into Pau’s net.

The game finished 2-2 and went to penalties, with Marcelo missing the decisive spot kick after the previous nine had all been converted. For Madrid, this defeat encapsulates what has been a dreadful pre-season. There was so much talk of change prior to the summer, but this all looks the same. Real Madrid need to get their act together if they are to come away with all three points at Balaidos next weekend.