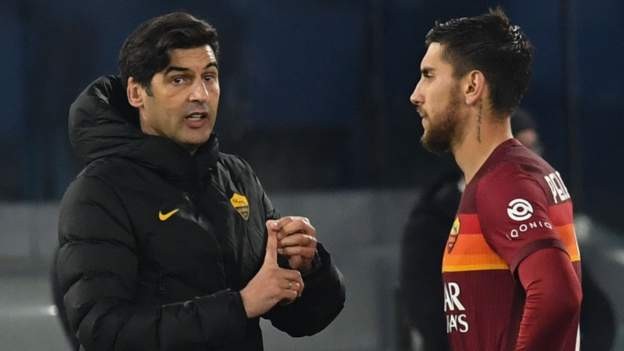 Roma were knocked out of the Coppa Italia by Spezia after a chaotic extra-time period that included one more substitution than they were allowed and two red cards.

The hosts had fought back from 2-0 down to force the extra half an hour in the last-16 tie - but they were reduced to nine men within two minutes of the restart as their evening unravelled.

First, Gianluca Mancini was sent off after picking up a second booking, then the Giallorossi had goalkeeper Pau Lopez dismissed after he made a mess of a clearance and took out a Spezia forward in the process.

Problem was, that took Roma's substitutions up to six when only five are permitted.

In the end, the error mattered little. Roma only held on until the 107th minute before Daniele Verde made it 3-2, and then Riccardo Saponara added a fourth for Spezia four minutes later.

When asked about the extra substitute, Fonseca said: "If there is an issue, we have time to discuss that internally."

The Portuguese said it became "much harder" after the two red cards and that the Serie A side, who were beaten 3-0 by city rivals Lazio five days earlier, are in "a tough moment".

Earlier this season, Roma were penalised with a 3-0 defeat following an administrative error in the make-up of their matchday is squad for September's 0-0 league draw against Hellas Verona.